Been having a tidy up and shift about of the game room, mainly driven by attempting to get the maximum light benefit over the painting corner from the window. If I'm honest it feels like we (the Mrs. and I), have done nothing but move stuff around, sort out etc for several weeks in order to accommodate daughter number two (Jess, 21 in January and born on my birthday :) and her partner, who had previously been struggling in a small rented flat at what I would consider a ridiculous monthly charge to a private landlord. Jess was becoming quite depressed, as even though both work full time they were still struggling. Anyway, upshot has been mass manouevres of furniture and lot's of strategic planning in order to make it work and the house is now sort of split into two, with Jess and Blake having the biggest front bedroom with the ensuite, and also the large front room below that, while we have moved into a smaller bedroom (with a better view and south facing). Youngest daughter Chloe retains her double bedroom (was never going to give THAT up!), even though at almost fifteen now she considers herself a terribly hard done by child. Partiton wall has gone up between the two 'reception rooms'  and we now find ourselves in a cosy little lounge, overlooking the garden and must admit it's pretty OK all round. I of course retain my small bedroom for painting and wargaming.

Today I refused to do any more, my back is aching from shifting wardrobes yesterday and I needed a rest. As it happened they all went out shopping in the dreaded Sales and I have finished setting up my room again, it's currently a sanctuary where I can escape from domestic upheavals.

I couldn't resist taking these pics, wife asked me to find a home for the keg of beer I got for Christmas from eldest daughter, so I took it upstairs and set it up for a laugh above my painting table, I mean it's perfect! Lovely golden beer and with a very hoppy taste, what my wife, who took a sip, described as an 'old fashioned hop taste', pretty good I thought, but her Dad was a dedicated real ale drinker as long as I knew him. I always raise a glass to him this time of year, and use his old 'Bexley Beer Festival' glass ( on pain of death should I break it).

I could do with a hand drinking it as my lot drink lager and it's five litres, but the last one (Speckled Hen) lasted a fair while and kept its condition well. I'm sure it won't go to waste. 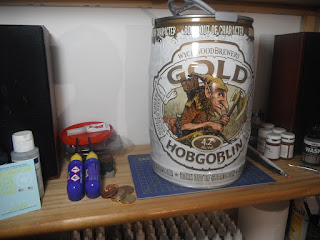 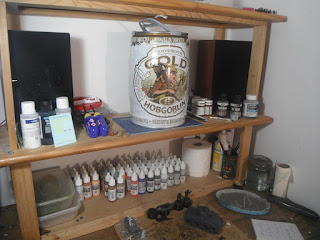