More FoW and an attack of conscience.

Inspired by an enjoyable read through a Flames of War battle report on Dai's blog ('Firestorm Caen'), I decided to set up a small game for the weekend in order to get some down time following the funeral on Friday. I feel I'm getting a real grip on these rules now, the basics are covered and I'm now starting to add in some of the special rules relating to Warrior and independent teams, stormtrooper moves etc. I played through several moves on Saturday using just the enlarged wall chart QRF that Tony kindly did for me. It's enlarged to double size and really is very useful, being stuck on the wall at the end of the table. The only other thing I did was to print off a couple of lists from the FoW listbuilder site, one each for Germans and Allies, these give all of the stats and info I need to play each force and are excellent. I actually left the main rulebook downstairs, but only needed to note a few things down to double check later. I got the 'Gun Tank' rule wrong, I thought you only made one roll to pick out an individual tank that is different to the rest of the platoon, but it's one roll per hit. 5 or 6 allows the firing platoon to pick out for example the up gunned Sherman 'Firefly', otherwise target allocates the hits as usual.

Once again I put a pair of Tigers on the table, and once again it left me feeling that I really must get some heavier Allied armour because the Shermans are hopelessly inadequate against the Panther's and Tigers! I have a full platoon of 4 Tiger I's, but I'm going to repaint two of them for the Russian front, as this will be a project for the New Year. I'll finish the game off later, and next weekend will be more Bolt Action.

On the subject of Bolt Action I ordered a small team of German tank hunters, the subject matter is
'Hitler Youth'. I have felt strangely uncomfortable with these castings given that they essentially represent children in uniform. They are wonderful crisp castings, and a couple wear a clearly oversized helmet and all have youthful faces. All carry a panzerfaust. I will paint them, after all BA is just a game, but at least I'm aware of the reality behind these figures. The four castings cost me almost £9.00 over £2.00 per figure is a record for me, but soon as I saw them I knew I had to paint some.

Usual load of photos, from the game and a shot of the 'Youth' castings that does not do them justice, I'll get more pics once finished this week. 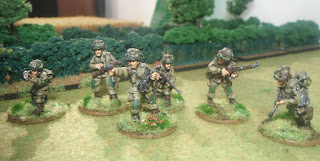 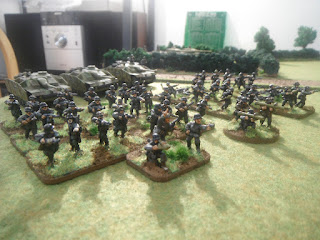 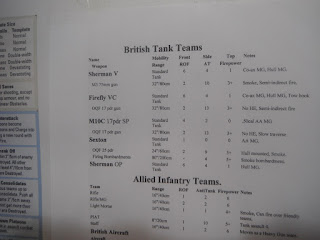