A question of scale.

Having spent several months and a fair bit of cash building up my terrain for 15mm Flames of War, I am reluctant to do it all again for 28mm Bolt Action. If I am honest with myself, I have struggled with the BA project from the start, but having finally got everything glued together and painted and had a few run throughs of the deceptively simple rules I have to say I'm hooked.

I did buy a few plastic 'Warlord' BA buildings, but I just don't like them and have no interest in painting them. So next I bought a tester MDF building in the bigger scale, lovely kit, amazing detail, but it's bloody HUGE and dwarfs everything else! What to do? After much thought I decided to simply play a game of Bolt Action on my Flames of War terrain layout. It struck me that when you stand back the 28mm figures don't look too bad at all, the buildings look a little small, but if I play around them rather than through them (and the rules allow this), things are acceptable. To my eyes, as a wargame, the discrepancy in scale is acceptable and saves me having to do it all again. I know that BA is usually seen played on fully scaled up terrain, but for the time being I'm happy with this set up and I intend to enjoy myself with it. I have set my Son in Law a BA Xmas challenge.

Numerous pics as usual showing general progress on the BA front. The Sherman has been built and painting is underway, it's had a bit of weathering but still a lot to do including finding 28mm stowage to dress it up a little. The StuG is only part built and the halftrack is about done, save weathering and decals etc.

This game saw just five squads per side starting off table and as each order dice was drawn I rolled for entry point across the long table edges, this worked well for solo play I found. I placed an objective ammo dump roughly centre table in order to give some focus to the game. Squads can only enter on a 'run' or 'advance' order.

An enjoyable game ensued as squads moved cautiously closer to the objective. The order dice are drawn from a bag so you never who who will get the next order and the situation can change constantly as initiative swings back and forth. The Yanks lot the MG team in only the second turn, I thought they were well deployed, but when a PanzerGrenadier squad suddenly jumped out in front of them and opened fire with assault rifles there was nothing they could do about it as they had already completed their 'fire' order. An 'ambush' order would have put the MG team on hold, awaiting a target of opportunity. It's very much fast and furious, and great fun. I'll play through the rest of the game today, but already I have a good feel for these rules and look forward to introducing a bit of tank action next game. 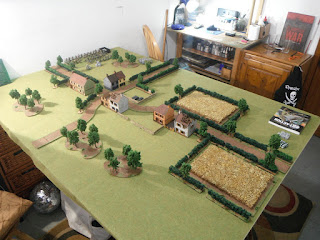 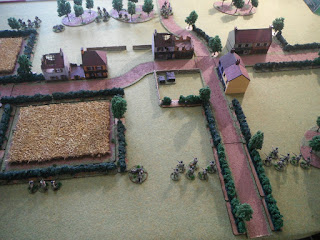 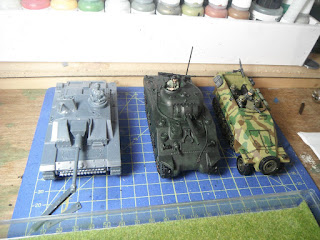 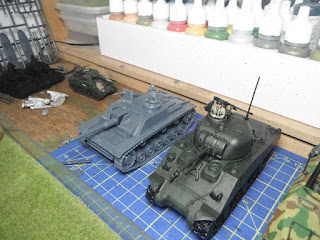 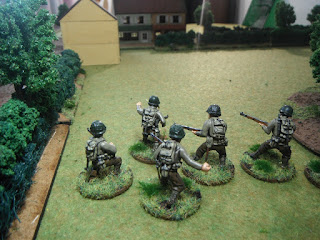 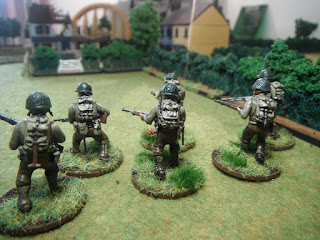 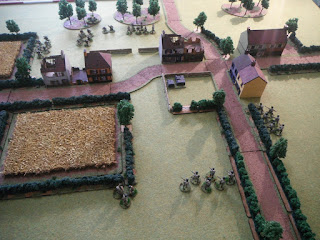 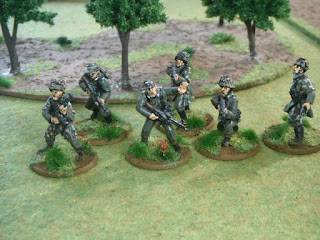 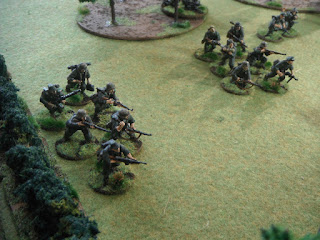