As another year draws to a close I'm already planning my hobby direction for the year ahead. Since discovering WW2 wargaming I have probably played more games in the last few months than I had done in the previous few years, and what's more my enthusiasm remains very high.

A game of toy soldiers!
The delights of 'skirmish' style gaming has also renewed my passion for individually based figures in the larger scale 28mm. I can't help smiling every time I set up the Bolt Action table, because the big tank models really do look and feel like toys, as one of daughters remarked the other day "Ah, look at the car going down the road" in a slightly mocking tone of voice. I told her it was actually an armoured half track, and her expression in reply was a picture.

I know it's not right for every period, but moving individual figures feels right for this period, and I'm increasingly aware that it would work well for the AWI too! It's still probably my favourite historical period and I have done it many times before, never quite feeling that I was getting it right, and certainly the Commands & Colors experiments did not produce the sort of game I was looking for so I sold it all off. However, I'm drawn to 'Sharpe Practice' as a second project to run beside my WW2 stuff, as it has loads of excellent AWI scenarios available, and the concept of 'big Men' (characters) and small companies of troops.

Another decision I have made is to box up all of my Flames of War stuff for a short while and to focus on Bolt Action. While I enjoy FoW tank battles, the infantry rules, especially the assault rules, are a bit more challenging, plus I'm duplicating in two scales, both figures and terrain. The Russian front beckons and I plan to start with 28mm, prefer metals of course BUT the Siberian Veterans box set looks so tempting.

Anyway, more BA shots, new test game, first moves all complete, order dice back in the bag ready for turn two.  Armour on the table for the first time so running through some new bits but all reads straightforward enough and easy to follow. I plan to expand the armour for both sides and have a second Sherman on order. German armour does need a repaint later to soften the camo pattern and to this end I have been doing a bit more research. 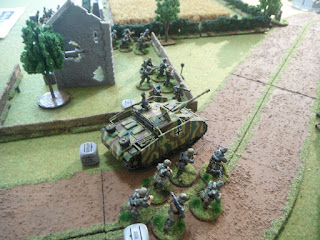 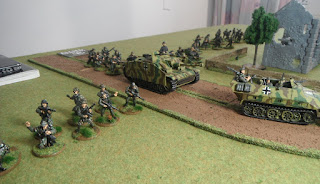