I have been spending a fair bit of time upstairs in what I have decided to christen 'The Escape Hatch', both painting and playing through more rule learning games. A lot of music gets played up there too as another side project I have going on at the moment is to rebuild my old 'Classic Rock' collection. Back in the day I dumped over a hundred vinyl albums believing that CD's was the way to go. I won't try to get it back on vinyl as much as I loved the cover artwork, Been playing a lot of Wishbone Ash recently, another of my old favourite bands, must have dumped over 20 of their albums. Currently enjoying 'Live in Chicago'. Hawkwind probably get a play most days, I have a large collection of Hawkwind albums. Also played this week, 'Physical Graffiti (Led Zep of course), Elmore James & a lot of Levellers.

But back to wargames, I'm at the stage now with Bolt Action where I can start to flesh out the infantry squads, so I'm taking them all up to 8 figures to begin with. I have a scenario in mind that requires some US Airborne to fight an advanced holding action so have added a light mortar team and a bazooka team. In BA each of the small teams gets it's own command dice. I also painted an airborne medic (paramedic?), as again under BA rules having a medic within 6" of a casualty gives a save roll to small arms fire, with a six to save. he can have assistants such as stretcher bearers etc.

Having got over my unease over the 'Hitler Youth' group, we after all only playing a game here, I decided to use them to represent an 'Inexperienced' squad. I did enjoy painting them, although they got a fairly quick job. I then built up four more figures using the most 'youthful' looking heads and faces that will complete the squad. The commander will be the guy in greatcoat as he also carries a SMG. One image that has stuck with me from the many hours of newsreels and propaganda films I have been watching recently is that of a very young looking SS soldier swaggering past the camera with an MG42 on his shoulder. His smile as he passes amid the horrors of war (this was 1945), has sort of haunted me since and I have found myself wondering what happened to him, did he survive the last months of war? Anyway, I tried to recreate him for the squad, so he has the MG42 on his shoulder and the field cap as worn in the film, his face is quite broad and strong. All together they should make an interesting unit and one of the attractions of BA for me the ability to paint characters.

Coming up is a German command group, again lovely castings. As I was cleaning them up I thought I spotted a cast line down the side of the face and was about to file it off when I realised that it was actually a very fine monocle cord!

I have started adding stowage to my Sherman and will add more. The stowage came from 'Debris of War' and I can highly recommend it. I know the boxes are too bright, but it was crying out for a touch of colour! 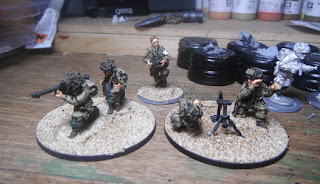 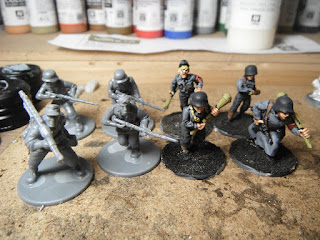 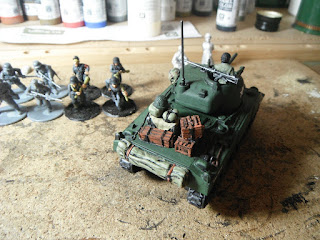 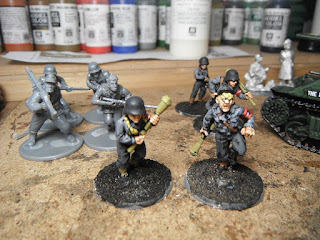 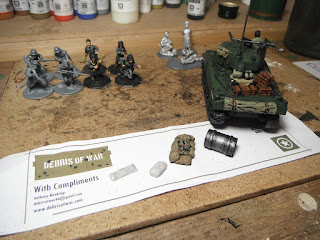