More 'Bolt Action' Bits ..... the StuG rolls onto the table.

Been doing a fair bit painting this last week, I think in order take my mind off the funeral arranged for this Friday for my Mum in Law. I have noticed that my wife has been endlessly cleaning the house in order to do the same thing, and what with my middle daughter Jess moving back in with her partner, things have been hectic. It's going well, both are easy to live with and work full time, only one minor gripe so far, we wish the lad would put his top on occasionally around the house, I did suggest that I start doing the same walking about bare chested, but not a popular idea. I must turn the central heating down a bit!

Anyway, here is the results of my latest efforts, more BA bits. Above all the StuG is about painted sufficiently for the table top, I'm certainly no camo expert but overall it's pleasing to my eyes, and like like everything else I intend to return to them later for additional touch ups and detailing etc. It needs a little weathering I think too. Commander in assault gun Grey uniform is not the most detailed of models so I may replace him with metal later, but he will suffice for now. Also added a German sniper team and the US mortar team, all based and finished. A six figure US airborne are also about finished and will be followed with another six. 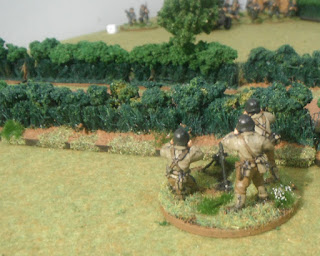 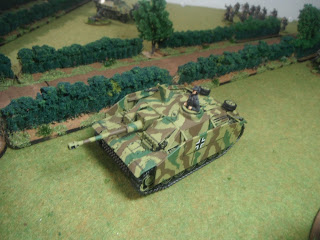 I have also been tarting up my 15mm Panzer Grenadiers for Flames of war, expanding them up to three platoons of six rifle/mg teams each plus support weapons.

In the New Year I have a feeling that the AWI is calling me back again, having discovered just how much fun 'skirmish' style games can be I am very tempted to give 'Sharpe Practice' a shot. This scenario looks so playable!
Posted by 'Lee. at 07:13