Well, it seems yet another year has shot by in bloggerland and it's time for the traditional 'Merry Christmas' message. Things have changed somewhat for me this last year, and for the year ahead I will be able to indulge myself a little more in my hobby. To this end I'm going to focus on developing 'Bolt Action' especially the terrain side, and begin what I hope will be my final foray into the American war of Independence using 'Sharpe Practice' rules and Front Rank 28mm figures. I have looked at so many AWI ranges with this project in mind, but given that I'll be building small company size units, individually based, and with numerous 'character' figures, then FR seem the only choice for me. They are chunky and made for handling, and free of those horrid casting 'worms' that spoiled my previous AWI project using Perry plastics and metals (now sold off). I'm quite excited about this project.

I still have lots to do on the Bolt Action front too as I continue to build up the forces. I had a little bit of a spend up on ebay and added a few more tank kits, a US jeep with MG and numerous other bits and pieces which go a long way toward completing German and US forces. I'm freely mixing mid and late war Germans as I'm not a purist and enjoy the different uniforms representing the finely tailored and piped earlier versions and also the latter baggier and plain version worn with the zeltbahn poncho over it. My Veteran Panzergrenadier squad are an example as seen below, now expanded to it's full 10 figures and armed to the teeth with assault rifles (2 shots). I could not resist giving them a an officer with jackboots and tailored uniform, he also sports the Iron Cross! All are Battlefront metals, and cost £16.00 for the pack of 10, including separate heads. I'm really pleased with them.

Anyway, I'll wish you all a very Merry Christmas and a happy and healthy New Year, and leave you with a few final shots for the year including a blown up StuG assault gun, shot straight through the front armour by a M4 Sherman, resulting in an immediate explosion on turn two! Not that easy in Flames of War to do that I thought, but certainly it was a high die roll on the damage table that caused the catastrophic result. Also in the pics are my newly painted German command group consisting of a fine monocle wearing commander in greatcoat, a medic (gives a casualty save opportunity if within 4" on a throw of 6), and a forward observer. 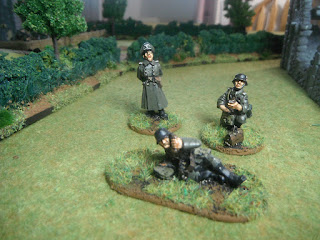 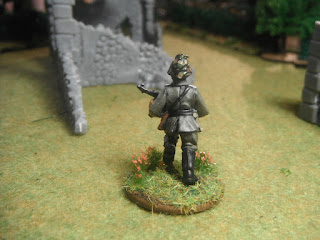 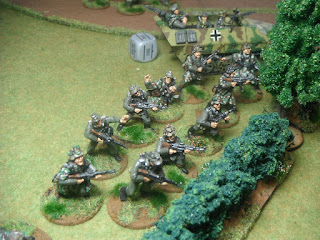 I do love my music, and I'm a big fan of the Levellers and have been for many years. They are from Brighton further along the South Coast and have continued to work out of their studios there, where their ethos has always been to inspire and encourage local people and bands, certainly over a career spanning three decades they have produced some magnificent albums and continue to record and tour, with one of my aims for 2016 being to see them live again. They released this version of their song 'The Recruiting Sergeant' for the charity 'Warchild' and it's a great twist on the traditional 'recruiting' song, with it's line 'If you see a recruiting sergeant boy, run away'! Made me think a lot about my hobby, but I'm comfortable with it, above all it reminded me that my own Brother Bob narrowly escaped death in the Falklands, when the transport ship he was on was blown up, as an army medic, he was one of the last off the ship, and some of what he saw and described that day was sheer horror. No fun War, but our hobby is :)