It's back to sea again for me!

I'm already thinking about what I want to do next. I remembered today that I only got as far as undercoating and blocking in the initial colour on my second Langton Napoleonic ship earlier this year. The little frigate I built was and remains a source of real joy, and she sits on my bookshelf where she is often admired and commented upon, but I think she could do with a fleet! So I took her down for a few pictures and a play with my camera settings. Number two is a 74 gun (I think) and I'm going for the stylish black/ red colour scheme shown in the Langton guide. And I'm even looking forward to the challenges of rigging!

Pics show the first red blocks in, needs strengthening up and somewhat untidy, but that will be corrected when I paint the grey/black. Amazing detail in those hull castings. 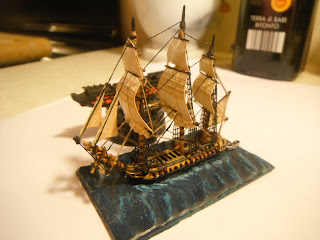 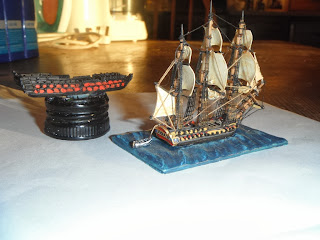 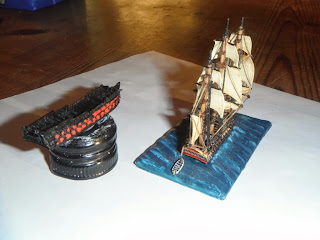 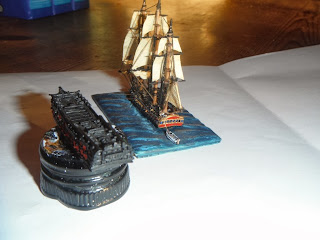 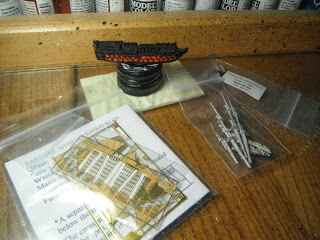 I also did a test paint on 8 of the US Airborne 15mm troops from Peter Pig. Used a white primer with a sepia wash as an undercoat and these figures took around 45 minutes to paint them as you see here (not including basing of course) ..... not bad going. Not sure I have the uniform shade correct yet (and a slice of that 45 minutes was lost in mixing and recording shades), but I like the way they paint up. 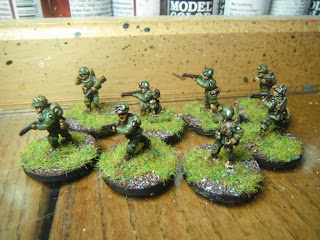 I also enjoyed a game of Commands & Colors over the weekend, the River Coa scenario. Always a tough one for the French side and again it ended in an Allied victory. As the French commander I wasted time demonstrating against the Allied left as I attempted to bring up infantry from my  left and centre against the right. I could not prevent units slipping away over the bridge - even a rifle unit reduced to a single block got away for another Victory Point ( any Anglo - Portuguese unit exiting over the bridge earns a VP!!). The French were pounded in the centre from horse artillery and infantry, at one point a 5 die throw turned up 5 infantry symbols destroying a unit of light infantry and causing it's attached leader to retreat having survived a casualty dice throw. I must say I thoroughly enjoyed the game.