I'll post this small battle report probably in 3 parts in order to be able to remember the flow of events. As said previously I wanted to try this small game in order to see how it worked down table, which with my hex grid is interesting. Facing does not normally play a big part in C&CN, which can take a bit of getting used to at first, so for example a unit can be standing on a hex effectively beside an enemy unit, but if it battles it does not count as attacking in flank, it being presumed that the battalion is manoeuvring itself and changing face as required.

The opening moves.
The French were lucky enough to hold a Grande Manoeuvre card, which would allow a rapid march towards the Portuguese line, but they first sent forward 2 regiments of light cavalry, who immediately charged the 2 line battalions drawn up in the open. British Heavy Dragoons were ordered forward in support of the Portuguese, while the rest of the army was hampered by poor command cards and proved very sluggish. A battery of horse artillery was however ordered up onto a hill in order to fire at a French Brigade as they move East. One French brigade now used the GM card to advance 4 hexes towards the enemy, with a Legere battalion ready to assault the Cacadores up on the hill. The Portuguese squares continued to battle against the cavalry, taking gradual losses as the fight continues, but holding ground. With great Elan the leading Legere battalion attacks up hill (-1 dice) but still manages to rout (remove) the Cacadores, and takes ground. Things are looking bad for the isolated Poruguese squares, and officers can be seen peering through their telescopes hoping to see the advancing British infantry moving up in support. They are still a long way off, but  the Dragoons should be across the stream next move hopefully, but with 2 command cards now sitting on the square tracker, options will be limited. 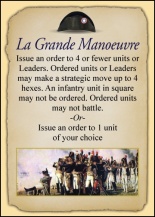 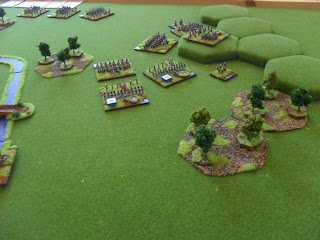 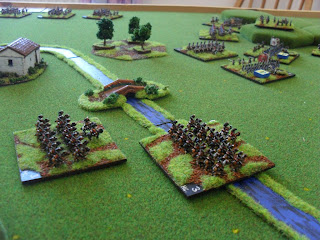 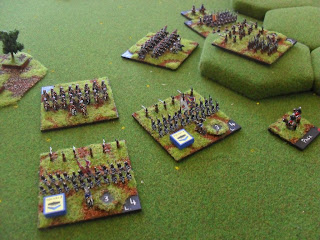 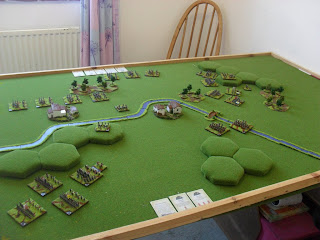 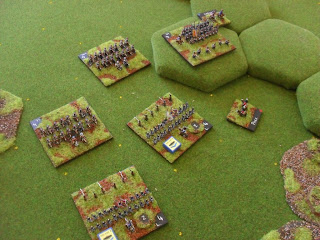 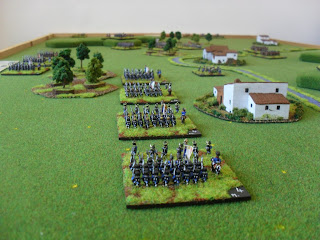