Yesterday was a funny old day. Having played through, photographed and written up my first C&C scenario I was left feeling somewhat deflated. Nothing I could put my finger on exactly, but as I sat reflecting on things in the company of the 'three terrors' who gathered about me as though deeply interested in my musings, a few things came to mind that I thought I would like to write about here.

Firstly, there is no doubt that having finally achieved what I regard as a good all round set up, with figures painted to a satisfying standard and a pleasing terrain board it has left me with a kind 'what next' syndrome. True, I'm painting more 6mm figures of the English Civil war period and I'm very happy with the results so far. having painted over 1,000 Napoleonics in 6mm I don't really feel the need to paint more at this time as there are more than enough for a really good sized game already. That leads me onto something else, the matter of just how much I actually enjoy playing wargames as opposed to painting soldiers. This is giving me cause for concern once again!

I cannot claim to be a student of Napoleonic Warfare, I have read very little beyond uniform guides and a few books on the Waterloo campaign. I actually understand little about period tactics. There was a time in my wargaming Life when I used to play American Civil War battles and I empathised so much with those miniature soldiers to the point where every move caused much excitement and anticipation. I had read so much about every aspect of that period, read endless personal accounts,  diaries, regimental histories and detailed stage by stage campaign records. To be honest I'm just not getting that same feeling with Napoleonics at the moment.

No doubt from the gaming perspective things would improve greatly given an actual live opponent. But I'm not really a 'clubby' sort of person personally, having in the past been lucky enough to have just a couple of good friends who shared my hobby. Konrad Kinch has been experimenting with 'Facetime' battles over on his excellent blog, and it is just possible that something like this may be a way forward, although I confess that seeing my own ugly mug staring back at me has not been a pleasant experience so far. I have tested the technology with my daughter, and it works well, even though she was just sat upstairs in her room at the time! Won't make me a better General of course, but could be good fun.

I must and will crack on though, moves are afoot to improve the somewhat bare appearance of my battlefield, Tony at ERM has despatched my initial order for 95mm mdf hexes to match my grid, and these will be used to remake the wood/forest hexes as well as some field hexes and other terrain items. It has occurred to me that I could indeed eventually cover the entire board in fully textured wooden hexes, a prospect which does rather excite me. For those hex players who don't know, Tony can cut hex sizes to order, mine fell between 2 standard sizes, and the quality is excellent.

So there you go, I feel better for sharing that and shall now get on with a bit more painting. As its been a while since I have posted any pics of our menagerie here are the 'Three Terrors' - Kenco, Kitty and Gibbo - all now much larger but still as mad as they were a few months ago, the Old Lady 'Bump' who is now 13 years old and Marcie the Golden Retriever who hates being left out of anything and has become rather disgruntled at the number of times a day cats require to be fed compared to a dog. 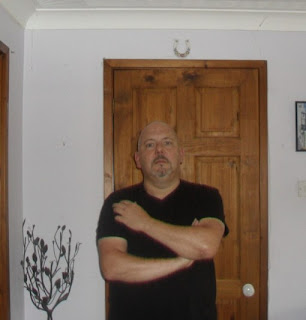 Portrait of a heavy rock loving Dysthymic wargamer posing like a hardman! I do smile sometimes too, honestly. But you get my point about Facetime - it could frighten the children. 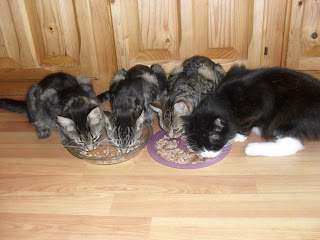 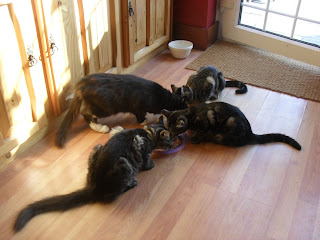 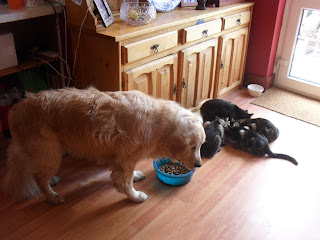