Back in the saddle again!

Having picked myself up and dusted myself down I am now firmly back in the saddle again, (which also happens to be the title of a very good Aerosmith song!). I have had a bit of a change around in my little wargame room and reset the board with every single base of Napoleonic figures I have so far for a major set to. This time I'm going to enjoy myself without the pressure of writing it up. As I hope you can see I have attempted to set out the figures in brigades of 3 to 4 battalions and I will be using a C&CN 'tweak' to enable an entire brigade to be moved on the play of any 'probe' card, which usually only allows two  units to be ordered. I hope this will significantly speed up early tactical movement and overcome the frustration of only being able to move part of a brigade  at a time. We shall see how this goes. The rule tweak is as follows and is only a slight variation on 'Foys' original idea:

When playing a probe command card a player may elect to move every unit within a brigade within the sector indicated by the command card. Where a brigade straddles two sections if the majority of the brigade is within the section indicated by the card then all bases may move. Units may not initiate  combat when using this rule, it is intended to allow increased tactical movement only. Otherwise the card may be played normally.


Previous comments - a thank you.

A big thank you to all to those who commented upon my previous post and who offered ideas on how technology can be used to play against a distant opponent. I am sure that somewhere between Vassal, email, FaceTime and Skype lies the solution and I am thinking about how best to proceed here. I am toying with a couple of ideas based upon your many suggestions and comments and looking in to how I might be able to capture a good wide angle overhead view of the table for such games and how two players could be provided with shots of their individual card hands in such a game, with myself as host moving the figures and responding to orders. Any more thoughts or ideas on this please keep them coming!

As I typed this post the postman just delivered my hexes from East Riding Miniatures and an order from Baccus for more ECW stuff. The hexes are excellent, and fit together perfectly. I have laid out a few for a quick photo. Immediately this opens up a lot of possibilities for improving the general landscaping of my table. Initially I'll be remaking the wood and other hexes which were previously made from thin plastic and did warp slightly upon the PVA glue drying. What it does mean is that my days of labouriously hand cutting hexes are now at an end. I have a fair bit of landscaping materials, flocks, grits, static grasses, clup foliage etc on order from Totalwargamer so this should keep me busy and keep up enthusiasm for the immediate future. 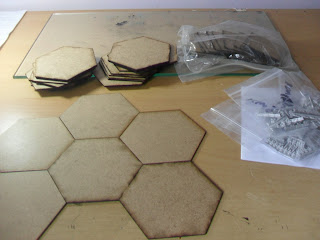 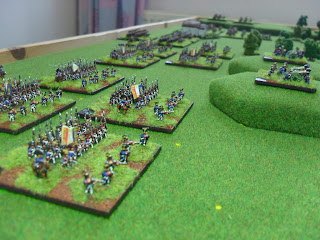 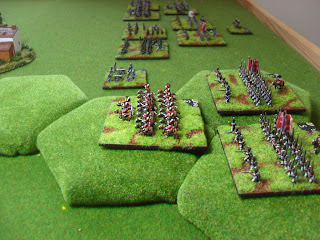 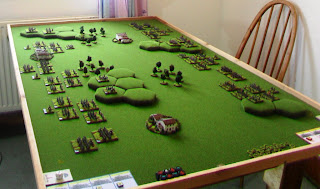