The latest game is progressing well with the French beginning to suffer heavy casualties as they advance on the British position. At one point the French who are attacking had a very poor hand of command cards offering only probing actions rather than a coordinated line of advance, while the British had a strong attacking hand they could not use to full advantage. This slowed the game up a bit so I decided to allow the British lines to advance, which quickly livened up proceedings. Many command cards on both sides were played to advantage, and at one point the French played the 'bombard' card which caused 2 battalions to retreat, including the Portuguese Cacadores who fell back from the village they were occupying under heavy artillery fire. As the 'bombard' card (see below) was returned to the pack the 'first strike' card was picked up. As mentioned in my previous post, I have decided to use this card as a sort of 'extra go' card in solo play, thus the French played a card ordering the artillery to again open fire, which caused additional casualties along the British line. I think that worked quite well, and had a genuine 'bonus effect'. The British hit back and advanced several battalions, while Heavy Cavalry charged the leading column of French infantry forcing them into square. I got to use the 'cavalry retire and reform' rule following an attack by a French battalion in support of the square. 'Combined arms combat' was also useful, at one point a total of 6 dice were thrown by a combined British line battalion fire supported by a horse artillery battery which devastated a French Battalion at 2 hex range and routed (removed) them. The British currently have 4 Victory banners to the French 2, but several British units are marked with losses. Next few turns should prove decisive. Some pics below of the latest action.

Future Plans.
It's finally decided! I'm going to begin doing the English Civil War in 6mm, played to 'Foy's' excellent looking CCN/ECW adapted rules, still under development. I love this rule system and I think it will work well. As for the figures, they will be Baccus, based on the same 60x60mm bases, probably 12pike/16muskets plus maybe 4 officers/sbearers/drummers etc out in front per base.I think the look of different coloured units based to match my Napoleonics could potentially look pretty good. I may start a 'sister' blog to keep both periods separate.

French Dragoons underway. I will of course continue to add further Napoleonic units alongside the ECW's. 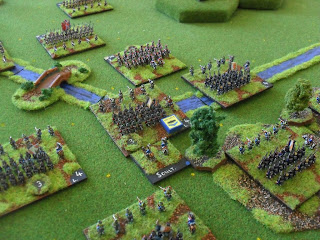 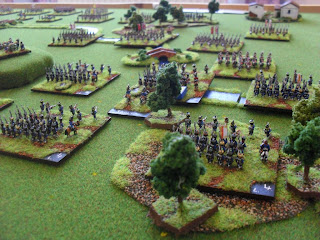 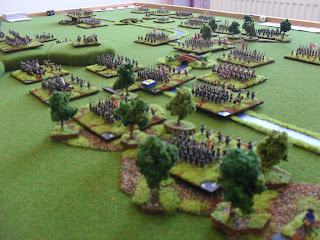 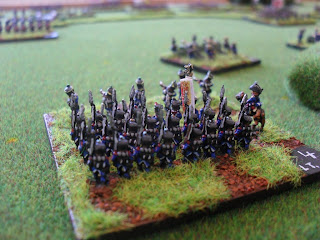 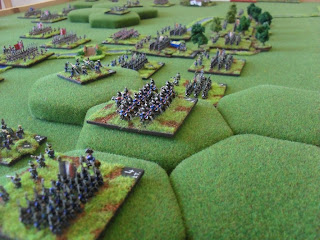 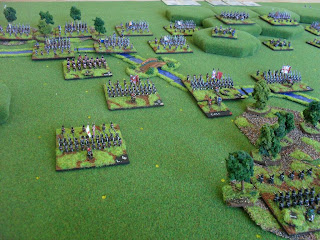