As it's Saturday morning and the family are either at work or playing Badminton I have taken the opportunity to play a few more moves of my somewhat less strenuous hobby of playing wargames.  I'm very pleased with how well the random deployment has worked for solo play. I'm playing 5 commands cards per side with the cards laid face up on the table, just choosing the best card as I control each sides turn. Turns are very rapid, literally a few minutes each in early stages so the board is changing quickly as attacks develop. Light cavalry charges can seem to appear out of nowhere, with a real element of surprise. The British now have two battalions pinned in square by French light cavalry, as the French try to bring up artillery and infantry support against a pretty poor hand of command cards. The effect of this on the British has been to reduce it's card hand by 2 cards, severely limiting its ability to issue orders where most needed. (C&C note: when a unit elects to form square in response to an attack the attacker selects a random command card from the controlling player and places it face down on the square tracker where it remains until the unit comes out of square, this places tactical restraints on the general). There have been exchanges of musketry and one British battalion have fallen back with losses, luckily its attached commander watched a ball fly just above his head but he was unharmed. (Attached leaders must test to see if they are hit when a unit they are with takes casualties, requiring 2 'sabres' on 2 dice). So far neither side has been able to use its artillery to any effect, the random deployment left them behind the infantry lines, but  they are now being brought forward where command cards allow. Still all to play for.

In the opening stages of a game of C&CN I find there is something of the feel of a chess game (I used to be an enthusiastic but poor club player many years ago). You have to think fast to develop your opening moves to your best advantage, and you remain very much aware of possible counter moves. I have never before played a set of wargame rules where you don't get to move all or at least a large part of your forces during a game turn. It's like playing chess against a clock where you move and hit the button and before you can sneeze its your move again! Maybe it's because I used to enjoy those kind of chess games that I enjoy the speed of C&CN moves.

From the British perspective I need to support those squares and get them back in line to free up my command options. Putting on my French Generals Bicorne I need to bring up the guns as quickly as possible to open fire on those squares and to add musketry from the infantry to the attack.

A few pictures from the game. You can see how much the game has developed in these few fast moves. 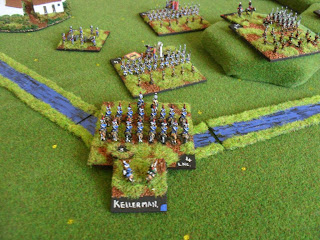 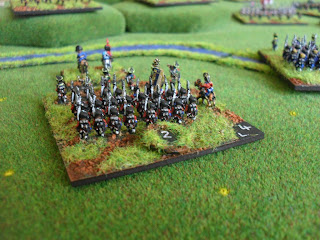 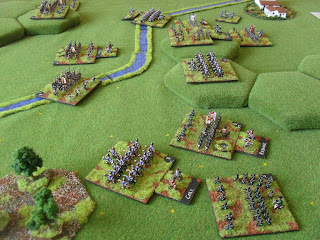