Having been a few days without a computer It's amazing how much you miss the internet! But I have managed to give my wargame room a couple of coats of paint and get a shelving unit in there. It's only a small room though at 9' x 7' what was the spare 4th bedroom come kids art room, and I probably could not get a table much larger than 6x4 in there, but I feel lucky to have it. I plan to fill the walls with military prints, but I've left them white to help with lighting for blog photography. I intend to fit a 'blue' CFL overhead and a softer warm white in a lamp to give a nicely balanced crisp light. A new carpet and curtains should make it a comfortable room. The standard CCN board (I use  100mm hexes) is 9 hexes wide by 13 hexes long, which gives me a small table of 3' wide by 5' long, including a little extra space all round for dice, cards, square trackers etc.... which is about perfect for the small room.

Yesterday I set up another small CCN game, 3 brigades of 3 battalions per side plus a small light cavalry briage of 2 units and 2 batteries per side. I decided to randomise the deployment by dicing for which section of the table (CCN divides the board into 3 sections) each brigade could be deployed. This worked well, with the French ending up with a cramped central deployment and no troops in the right flank sector, while both batteries were on the left flank. The British were more evenly deployed, but with a brigade of Portuguese troops somewhat cramped and unable to deploy in line. The stream is fordable for this game (I have some nice bridges on order from Baccus). I'm about six fast and furious moves into the game so far, 5command cards per side, and 5 VB's for win. Again this is a game to keep my CCN skills up to speed! I'm working now more on developing attacks and combined arms combats.

I have more Baccus figures on the way now, including British Hussars and Household cavalry, French Dragoons, British infantry in Belgic shako, more French infantry etc. I plan to begin painting some bases towards my long term Waterloo project now, rather than focusing strictly upon the Peninsular campaign, although I will continue to add more peninsular units too so that I can play through the CCN scenarios. I'm going to do a base of Imperial Guard Lancers shortly and I plan to set myself a small challenge to see just how high a painting standard I can achieve in this scale! Should be fun.

A couple of pics from the game so far. The kittens are growing fast and seem to have taken a fancy to my painting chair. 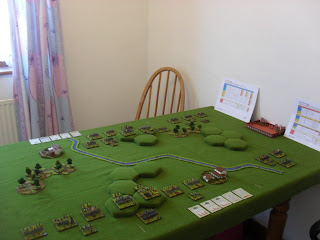 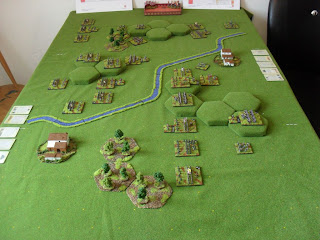 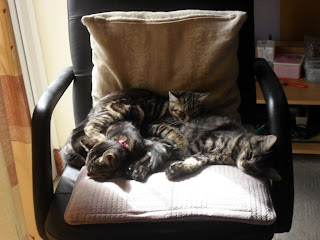