I have been doing a bit of painting for the last couple of days, some 20mm Spanish artillery as a 'thank you' for assistance given to me in getting to grips with C&CN, and some very useful research materials.  It's been nice to paint a few larger scale figures, but I must admit I get a lot of satisfaction from each and every 6mm base that I paint, so I could not see myself getting drawn back into the larger scales again. More Baccus goodies arrived yesterday, and I'm itching to paint every one of them!

Interestingly  Knotel shows a member of the French 15th Line Infantry Regiment wearing the earlier white uniform, and states that they wore that uniform into Spain in 1808 "and for several years thereafter". That's good enough for me! Next French battalions painted will represent the 15th in white uniforms. Should present a nice contrast with all of the blue.

The game.
Played a few more moves of the game, with the French now taking form control and attacking in force in the centre, across the stream. Two British battalions have routed, both as a result of heavy fire and a determined advance under 'La Grande Manoeuvre' card, which allows a huge 4 hex move (but no combat that move), an excellent card for getting to close quarters fast. On the British right the positioning  of 2 French batteries on the hill has hampered attempts to take the high ground, and slow progress has been made. The British did get to play the rather odd 'short supply' card which allowed them to send a unit of French cavalry back to the baseline! This in turn allowed a battalion to come out of square which freed up another command card. A read through the rules seems to confirm this as a legit use of the card, but I stand to be corrected!

Once the game is over I'll clear the table ready to be framed up with pine edging which should give it a neat finish. The cloth will be pinned down nice and flat too. The Mrs is off to Ikea tomorrow so I have asked her to look out for a lamp and a couple of shades, and to look at A4 size picture frames - the bare walls are driving me mad, but it's slowly coming together. I'm also keeping an eye on the Hospice Shop for a couple of suitable wooden chairs.

Few more pics from the game. 2 VB's to the French so far. 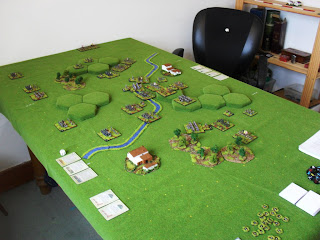 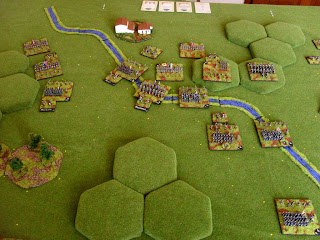 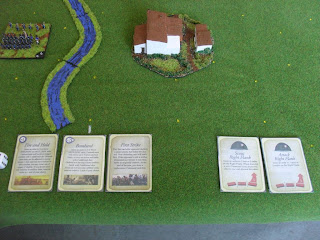 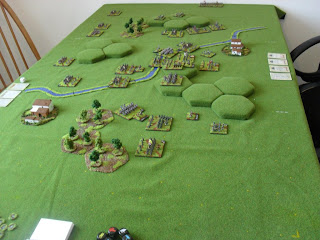