With Summer finally arriving it's been nice to be able to get out in the garden for a good tidy up. But I'm still plodding away on my Napoleonics and I have added a couple of bits for the game and a couple of nice little bridges.

Bridges.
I wanted a couple of bridges for my stream/river sections. It can seem a bit odd at first when you set up for Commands & Colors that the game does not feature any roads at all, but after playing for a while you tend to forget about such things and just assume roads are there but not modelled on the terrain. C&C still gives the odd bonus movement if you get the right command cards. Anyway, this left the dilemma of how to model the bridges which do not connect to a road system. I decided to extend the Baccus bridges so that they would span my stream sections and added card to both ends which I then landscaped. I'm quite pleased with them on the table and they will be useful for future C&C scenarios.

'Square trackers'
C&CN has what I consider to be a very good system for replicating infantry forming square in response to cavalry charge threat. I have to say that Polemos also handles this rather well. In a C&C game the attacking cavalry player asks his opponent if he will form square, and if so the unit is marked in square and the attacker then selects one command card at random from the opponents hand which is then placed face down on the square tracker. Obviously, the more you can pin opponents infantry into square the more it limits his command options, which has quite a realistic feel to it in play. Infantry in square always get to battle first, but with just a single dice. If they get a 'bounce back' result the attacking cavalry are unable to attack the square that move. Even when cavalry do get to melee it is very difficult to break a square of steady infantry, as it should be. The supplied markers and tracker are nice but quite large for 6mm scale so I reduced them to a more appropriate scale as you can see. I glued the markers onto small 'junior scrabble' pieces so that they are easier to pick up that thin card. I should add here that I was considering producing units in square, but a test proved that figures in marching/advancing pose don't quite look right in square! Firing line would be different, but for now I will have to stick with the markers, which do seem to have a sort of charm of their own.

'First Strike' card.
This card has irritated me in solo games! I either forget it's available to use or else it simply seems odd playing the card against myself! My solution is this:  when a command card is played and returned to the pack after each move, if the First Strike card is picked up as the replacement that commander gets effectively another go. Return the card, choose another from the top of the pack and then make the extra move from available command cards. Seems to work for me.

Painting.
Just finishing off another British line battalion, first one in the latter Belgic shako, which is well modelled on the little Baccus castings. Pics will follow in due course. I need to add more Portuguese infantry too. I'm going to give myself a big treat and paint the Dutch lancers of the Guard in those fine red uniforms. Of course they can't figure in any of my planned Peninsular scenarios but I'm sure I will be able slip them in somewhere :-) I'm going to see just how good I make these look, and really give them some extra attention to detail.

The game.
I wont bother writing up these game moves, but a few more pics shows the general situation as the French columns begin to advance, through the woods in the centre and towards the British lines. They have already earned 2 Victory Banners thanks to cavalry action on the flank, where 2 lancer units have routed 2 light dragoon units. I'm finding I can play pretty well just of the reference Cards now, consulting the rule book on more complex issues such as combined arms combats and the square sequence, but I'm getting there. 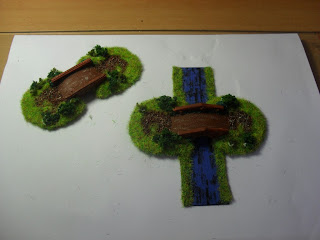 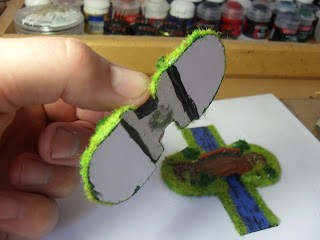 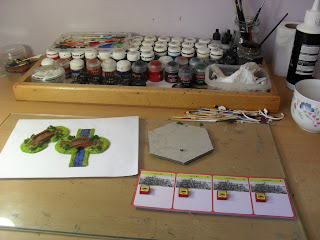 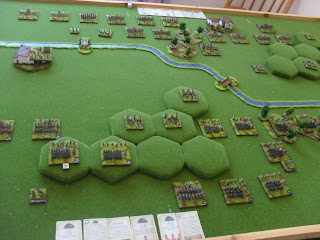 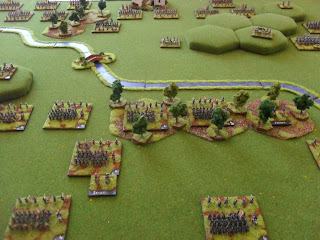 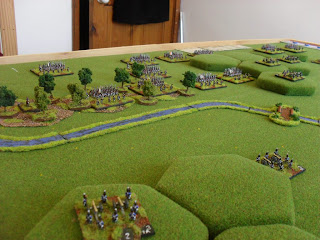 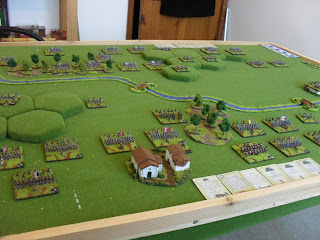