I just had to try this out, I may be mad, but it's been on my mind a lot recently, could it/would it work as a fun solo game. So at the risk of attracting derision from 'serious' wargamers I present a short overview of how things went.

The first thing required was to adopt a standard 'Distant Unit' (DU) for moving,  firing ranges, combat, retreat moves etc so another trusty wooden knitting needle was procured from my wife and marked out in 2.5" sections, this would be my distant unit measure. By chance this converted to 5 sections on the stick, handy as 5 DU's s the maximum artillery range. The DU is also used to represent the area occupied by a unit as shown in photo below, whether deployed flank to flank or front to rear, although I'm not sure this is essential in an open game.

I kept things very simple, just a few units per side and 5 each of my shiny new Ramekin order chits per side (painted and varnished 15mm MDG circles). I rolled a red and blue dice to see who took the first bound and it came up British. using the chits to mark activated units is a revelation to me as they really help to keep track of things, when a unit moves and has no further actions the chit is removed  but is left in place for combats and then removed as resolved. The game developed quickly in true C&C style and units were soon in firing range (2 DU's). I used the revised Ramekin charts for standing ranged fire, generally it reduces the combat dice throws by 1 dice which makes a surprising difference to the casualty rate which feels much more realistic.

In no time at all I was getting used to the concept of a DU for movement and firing. Terrain features were all clearly defined, and unlike moving onto a single hex a unit counted as being in or on terrain when it physically moved into contact with it, thus a battery of guns moving onto a hill, an infantry unit moving into a village or into woods etc. Close combats were resolved when units moved into contact with each other, two units can attack a single unit in the usual C&C manner and artillery can still support a close combat in combined arms combat as per the rules.

Retreats seemed no problem to resolve, you just move away towards the table edge where possible and if rearward movement is blocked by friendly troops casualties are lost in the usual way. Bolster morale worked just fine using the DU to establish when supports can be claimed to prevent falling back, obviously this was only a short game and more play will be needed to work through all of the retreat/morale situations. Leaders act as usual, they can join and lead a unit, detach and move etc. Leader retreat is not something I have tried yet (with it's specific hex path in the rules), but I see no reason why a commander having to retreat 3DU's and avoiding units in his path should be a problem.

To be honest I had a lot of fun with this, the game flowed along in C&C style, casualties mounted up gradually, cavalry charged cavalry, made breakthrough moves, infantry formed square against attacking cavalry, units fell back when reduced to support fresher units and at the end of it all the French won a resounding victory. I know that it could only really be used in friendly games but I will definitely be keeping this as an option for my solo games.

Certainly for me the big thing was the aesthetics, I am less keen on grids these days than I was, preferring a clean open table, and after more than eight years playing C&C they remain the only Napoleonic rules I ever fully enjoyed. 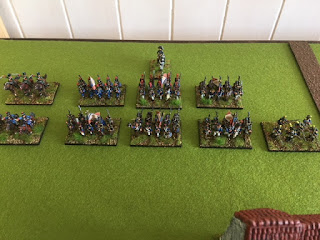 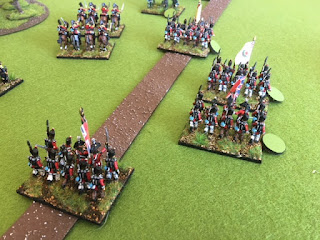 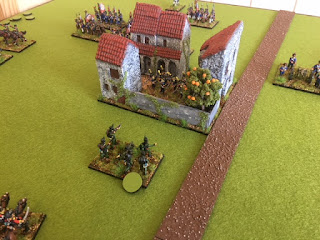 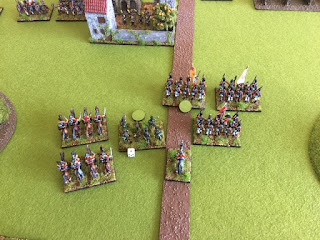 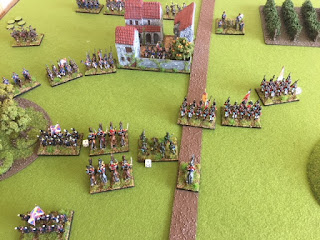 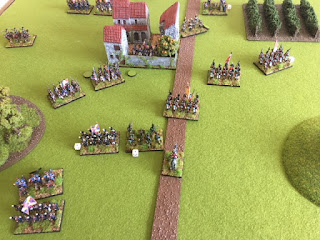