Managed to get about another three hours painting in yesterday over a couple of sessions so the first four figures are progressing well. The next four are now cleaned and assembled, the lance hand needs to be drilled out and the heads are separate so that they can be turned and positioned for some variety. I will probably try to get them undercoated today, which is quite a time consuming job in itself in 40mm scale! The plan is to finish the first four to this kind of basic standard, paint the next four the same and then work on highlighting, retouching and generally finishing off all eight riders before moving onto the horses. As previously said I'm taking my time with these and painting slowly with as much care as I can, even so there will be areas that require touching up or tidying up.

Before I attempt to paint the 'N' on the shabraques I'm going to see if I can find some kind of pen out there that will allow me to draw an outline guide for accuracy. Problem with freehand or brush is getting the paint to flow sufficiently well.

I have solved the problem of the lances. The brass rod looked a bit too thick and was going to prove difficult to create the point, quite by chance eldest daughter brought us round some incense sticks - I'm not actually keen on them myself and these are apparently White Musk - but the first thing that I noticed was how suitable the handle section would be for making lances, as you do! So I chopped off the end 70mm, carved the tip to a point and the result is what you see below, I think scale wise they should actually be 60mm.  I'm now looking for printable pennons that I can paint before adding, or I may hand paint one and then scan it.

All in all coming along a treat and it's already done wonders to lift my mood. 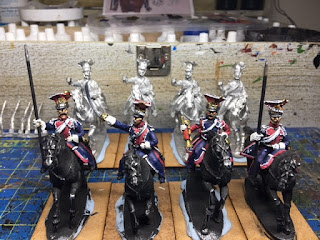 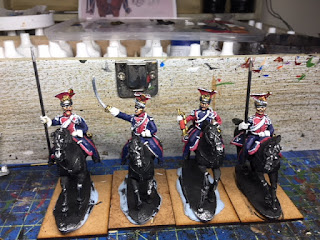 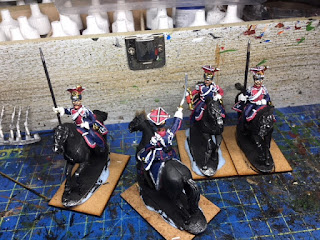 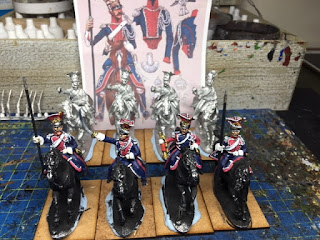 Edited to add images with lance pennons - first attempt! lances cut down to a scale 9' (60mm). 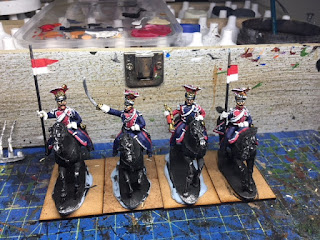 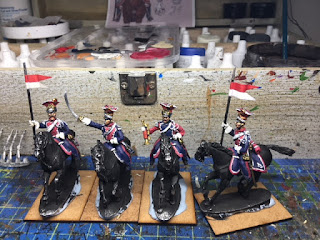