I seem to have spent hours this week messing about with MDF and foamboard in an attempt to make some hills for the C&C mat. First attempt was to draw around a hex and then cut out freehand with a new scalpel blade but that was a total failure as there was too much variation in the sizes. Next I hit upon the idea of gluing each MDF hex down onto the 5mm foamboard to produce 7mm 'slices' three of which were then glued together but once again the end result was not to my satisfaction. I then textured the edges with my basing stone before painting (you can see the results below), but yet again I was not happy as they looked far too chunky and the lot went into the bin. The final solution was to make 10mm slices, two of which would create each hill. By gluing together two sheets of the foamboard and allowing to fully dry before cutting around an MDF hex held in position by a couple of small blobs of blu-tac I managed at last to get the results I desired. The edges were then painted and a printed hex shot from the mat itself was glued down on top.  So what I have are lots of 10mm hexes which can be used singly or doubled up, I think they probably look better using two together although I can build some larger hills using a single level rising to two levels.

Having now perfected the method I'm in mass production with another batch currently drying for finishing tomorrow. 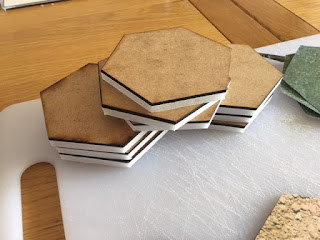 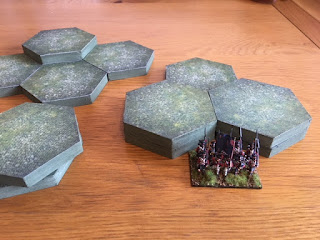 EDIT: I am now the proud owner of 12 upper sections with printed tops and 12 bottom sections, enough to be getting on with!
Posted by 'Lee. at 09:47