Whilst this blog was started 10 years ago as a therapy blog for my battle with chronic depression I don't generally these days bang on about it too much here, but rather try to keep the focus on painting model soldiers. But sometimes living with Dysthymia, (Persistent Depressive Disorder as it's more commonly known now), does present challenges that can be difficult to cope with, and on the occasions when a major depressive episode comes along (delightfully known as Double Depression), things can get very tough indeed. Knowing the illness as well as I do after so many years I am at least able to recognise when the latter is the case and just recently I have been locked into a period of the DD's! It's more than just a touch of Lockdown Blues, I coped well with that and the DBN painting project certainly helped to get me through the days. It's a kind of 'locked in' syndrome where simple everyday things just become hard to get done, you feel constantly fatigued, an overwhelming sense of sadness, low self esteem and just generally mentally blocked. I almost deleted this blog over the weekend.

Yesterday I decided to try and give myself a push in order to fight back against it, by amongst other things setting myself a new painting challenge, to paint the 40mm Polish Lancers that have sat in my drawer for almost a year. I know that completing a unit of 40mm soldiers gave me the strongest sense of hobby satisfaction, a really uplifting sense of achievement that I just don't get with the smaller scales.

So, I'm going to paint a unit of 8 Sash & Sabre Polish lancers and probably record the various stages of progress to keep me focused. I'm starting with the officer, trumpeter and two lancers with a further four lancers to follow to complete my standard eight figure cavalry unit. So far I have blocked in the two main shades and done a bit of work on the faces. I'm keen to get the colours right which is tricky as almost every reference shows slight variations in shades between the 'blue' (actually a dark blue/grey) and the 'red' ( which varies from crimson to deep red to almost pink in the references). I settled upon the reference image you see below as being most representative of the true colours and these are what I'm attempting to match. Early stages but happy so far, obviously I need to find a suitable highlight for the main coat colour without going to light.

Lances will be made from brass rod and I will need to create the sharp point, add the lanyard and the pennon and I'm wondering how best to do this. carbines will be painted and added separately and reins will need to be added to the horses as I did with the 13th cuirassiers, then I used card but this time might go with foil from wine caps. I estimate the unit will take a couple of weeks or more to finish and that they will give me a real boost at a time when I could do with it. 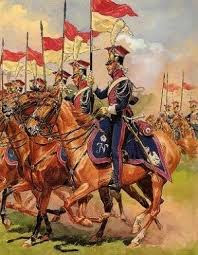 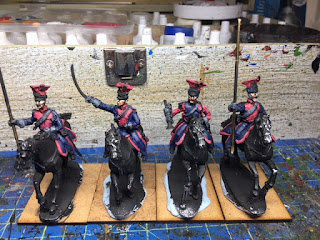 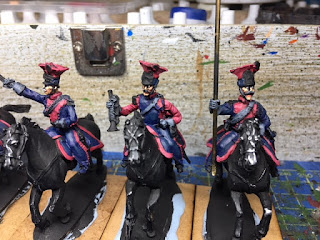 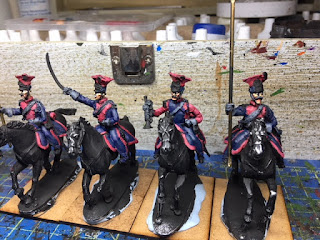 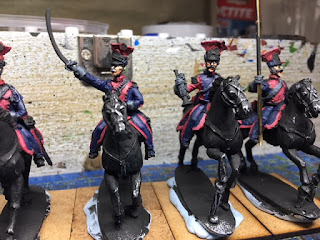