To return to the painting of model soldiers - with my mind now pretty well made up as to how to proceed with the building of the wargame table - I have made a start on some Sash & Sabre British Heavies. A session yesterday followed by a nice relaxing Sunday morning session today has enabled me to paint the first four troopers. I found it a tad difficult obtaining solid reference material for these chaps, representing as they do a unit on campaign in the Peninsular war, pre1812 when the helmet would appear to have been widely introduced. Breeches for example are shown as buff, off white or frequently as depicted here in the blue grey overalls with riding boots. I may yet alter some details, the cuffs I think need lace adding as these are not cast wearing gloves. For now they're not too bad I think. I'll probably assemble and paint the next four before painting the eight horses together. I have another bag on order which will eventually bring them up to sixteen figures. 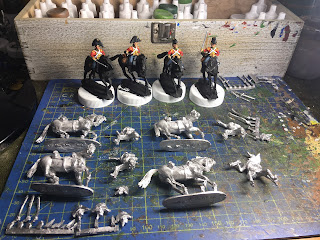 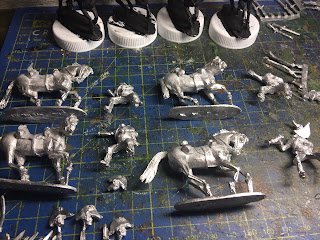 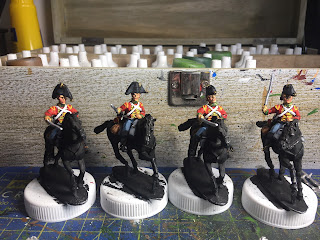 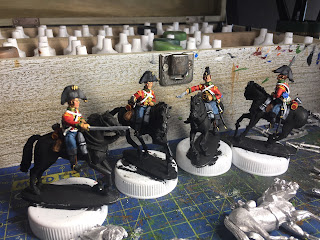 Whilst browsing Facebook yesterday I came across Steve Barber Models and his 'Commission a miniature' service. Steve is clearly a very talented sculptor of miniatures and his page featured the first of a 40mm commission of Napoleonic characters. I'm sure all of us 'Sharp' fans can guess who he is, and Steve informs me that he will be available for purchase in about a months time and others will follow in due course, although for now they are under wraps. I will definitely be down for a set of these.