100th commemoration of the end of The First World War. To the memories of Alfred Charles Gramson (my Grandfather) and his brothers Richard Gramson and Henry Gramson.

My Grandfather Alfred Charles Gramson was twenty one years old when he signed up for 'Three Years with the Colours' on 9th September 1914. His Attestation papers, (a rare survivor of a fire at records office I am told), shows that he joined the 3rd East Kent Regiment - The Buffs. Regimental number G/2395 and his signature was witnessed by his Father. His service record shows that he was sent for training at Canterbury Barracks and embarked for France from Folkestone Harbour on 31st August 1915 recorded as 'B.E.F. France'.

My Aunt Vi who is now 92 recently told me that it was Henry who broke the news of Richards wound to my Grandfather Alfred shortly before Henry himself was wounded. Both returned to duty,

Sadly Henry is recorded as 'Killed in Action' on 2nd July 1918. Duty location  is shown as 'France and Flanders' at the time of death his unit were serving on The Somme. He was 34.

Both my Grandfather and Richard survived the war, Richard being discharged in 1918. My Grandfather was given home leave on 10th October 1918 and was married to my Grandmother on 19th October 1918. He died in 1956, 2 years before I was born so it's been a real honour to discover his story and that of his brothers. 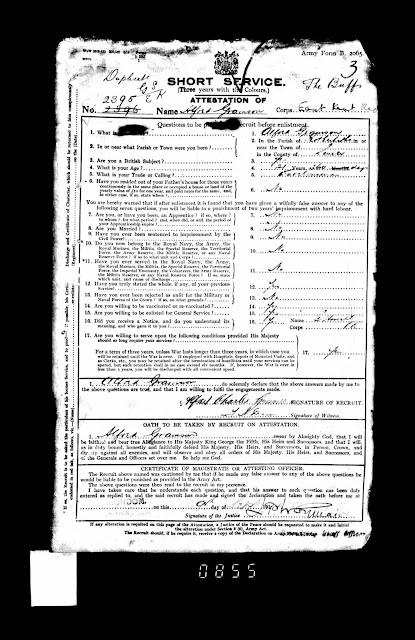 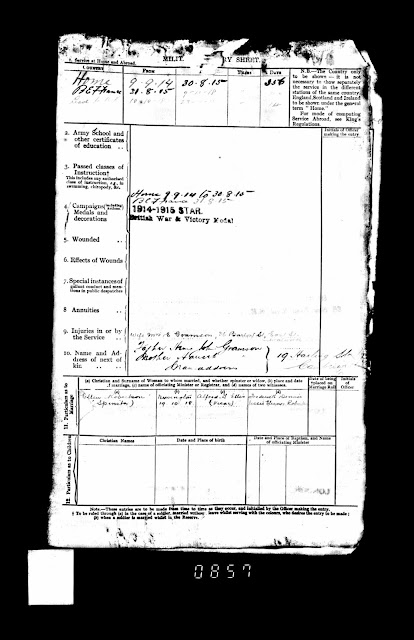