I'm home alone again for a week -well I have the dog and cat for company of course - but Shaz is back in the UK for a week with the kids and Gran children. She will be back on Thursday and once again will be bringing back some more hobby goodies in her suitcase. I'm planning to keep busy painting soldiers and getting in some long dog walks, my legs are aching this morning as yesterday I walked Poppy to the top of Monte Corona from where the views are magnificent, if I go again today I'll take the camera. It's rainy season here in La Safor Mountains, but the sun still shows it's face most days, today is dry and bright at 22 degrees.

I have been quietly beavering away on a little background project for a month or so now, the aim being to replace the Commands and Colours blocks with individual 15mm soldiers. Some might recall the huge box of 'Blue Moon' Napoleonics that came with us to Spain 7 months ago, sufficient to replace every type of British and French block with a figure. You can see below progress to date, British infantry, line, light & rifles and the first of the French infantry. 4 blocks per unit, 3 in the case of rifles. I have 6 British heavy dragoons undercoated (3 per unit) and will then hack through loads of French line in campaign dress. When I tire of the demands of painting 40mm soldiers I find I can whack through 12 or so 15mm figures in a couple of hours painting session, which is quite rewarding.

I have no plans to do anything more than replace the blocks and play on the board just as it is, I much prefer the feel of such playing pieces and the visual impact, they are robust enough to be scooped up and knocked about a bit. As you can see all will be based on 6mm steel washers with the intention of storing them in boxes lined with magnetic sheet. This combination of board games and models is something I am keen to take further in the future and C&C offers an awful lot of potential.

By next Friday I hope to present the four completed 40mm British line battalions, just eight flank company to paint this week and they will be done. I painted the two standard bearers and a drummer to complete all of the command figures required, as said before each battalion will be of 29 figures including a mounted officer. Then it's back to the French, slotting in more 15mm's as and when I feel like it!

40mm figures by Sash & Sabre, 15mm figures by Blue Moon, all available in the UK from good old Andy at Old Glory UK. 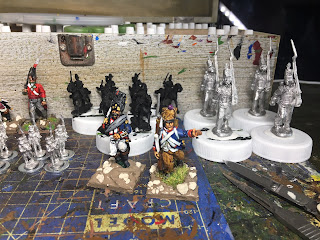 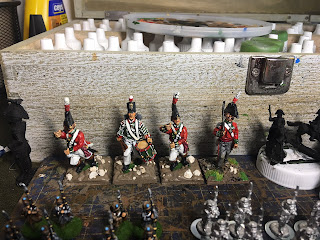 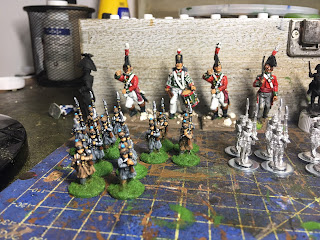 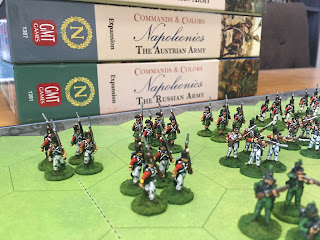