I got a fair bit of painting done while Shaz was away in the Uk, that and some good dog walks.I'm definitely feeling and looking far healthier since the move to Spain and my mental health is very much restored from the time when I began this therapy blog.

In 40mm I focused on completing all of the extra command figures for the four infantry battalions and then finished off the basing on sixteen voltiguers. I still need to work back through each battalion checking details - for example brass barrel bands on one unit need adding - but as you can see they make quite a formidable sight when viewed together. The British battalions are equally impressive, but I still need to paint the last four flank company for the last battalion so probably next week before they attend for parade here. They will be followed by the first of the French Chassuer a Cheval.

For the 15mm C&C project I painted six British heavy dragoons (British cavalry are of 3 blocks while French are of 4) , in a single session. They seemed to take no time at all, a 000 brush was used from start to finish on the figures, and a 0 brush on the horses, my method being to quickly pick out the colours being careful not to make mistakes that require time spent repainting or touching up. For example the dragoons arms were carefully painted leaving the lace work area black before adding fine lines in yellow to the fronts. belts were painted with a single dash of white paint and I find that leaving some black to add depth gives me the result I am looking for. I'm highlighting the Flat Red with Amaranth to give them a nice bright finish once satin varnished (two heavy coats), as these are intended very much as 'playing pieces' that will be handled quite a bit. I'd say a couple of hours max for these six cavalry and I'm pleased with them. I'm now applying the same method to French line infantry in campaign dress and I'll probably hack through quite a number of them over the next few days. You can see the first eight below, I have sixteen more sitting on washers to follow but I'm going to paint the four British 40mm's first over the weekend.

Sunday morning!
Further to the above, I painted the four British line to complete infantry phase 1 yesterday, save for some basing work etc. All of my 40mm's currently sit on shelves for easy access, I just need to give them a soft brush now and then to remove dust, but I do enjoy being able to handle them. This morning I took a few pics as an overview of where the collection stands to date. 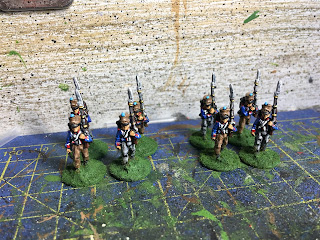 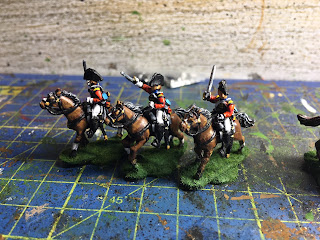 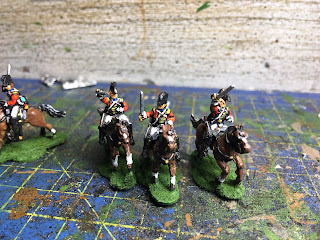 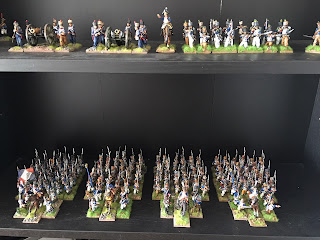 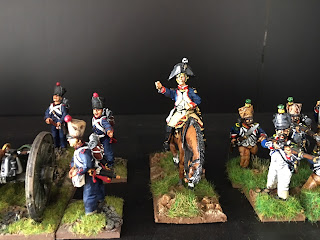 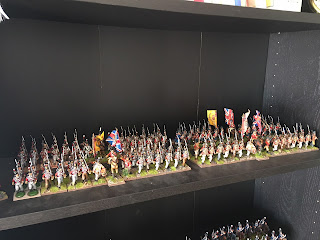 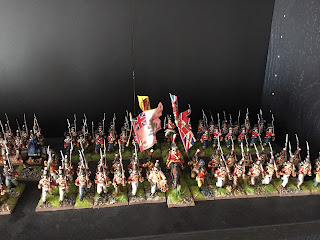