Yesterday I got a couple of good long painting sessions in, and the result was four more British Infantry completed. I'm really beginning to find my stride now with these 40mm figures and I have just four more figures to paint to complete the first four full Battalions. The decision to add four flank company figures per unit was taken mostly because I had the figures and that one unit (The Buffs) arrived with them already painted.

As I'll soon be turning my attention to rounding off the four large French battalions (35 figures per battalion including a mounted officer) I thought it a good idea to jot down a few colours for when I return to painting more Brits in due course.

The British redcoats are painted starting with Flat Red (all Vallejo paints used), then highlighted with Amaranth Red whilst still wet. The latter is a nice orange red and once fully dry I add a wash of red ink to add depth and shading, wiping the highlight areas as required. This gives me a very satisfactory redcoat. For officers I add some Orange Red to represent the better quality cloth.

White trousers had been a bit of an issue, I had been highlighting with Ivory but it was still too 'white' for campaign trousers. I have now settled on Light Grey highlighted with Sky Grey and this seems to give a much better look.

Everything is of course painted over a flat Black undercoat, the Vallejo paints being able to cover well over this. As I paint carefully picking out the details etc I find that I don't need to use black other than to touch up, but the black alone is a little flat and I have found that highlighting with Black Grey works really well on backpacks, shakos, bicornes etc.

Faces have been a little more problematic. I have now reverted to the two shades that I used for years on smaller scale figures, Light Brown base and a careful highlight using a size 000 brush and Flat Flesh, down the nose, dot in both sides of the nose, dot in above the lips, the chin and the cheekbones and ears. Recently I have started mixing in a small amount of red to the Flat Flesh and slightly highlighting the cheeks and beneath the lower lip and I must say I really like the impact this gives my 40mm faces, maybe too 'toy soldier' for some but I really like it. Previous attempts using various browns (on the Highlanders for example) resulted in far too strong a finish, the subtle 'rose' giving a finish I'm far happier with. Eyes I just try to add the whites with tiny single dots, sometimes I overdo it! I like to paint in teeth where figures are open mouthed.

Before I paint the final four British Grenadiers (?) ready for the Grand Review next week I'm going to paint the foot command figures for the fourth French battalion as you see. As I found a bare head in the spares box I decided to cut the sergeants shako from the face, file it flat then drill it out so that it sits on the bayonet, a minor conversion but gives him a slightly different appearance.

Pictures show before and after Vallejo Satin Varnish and as I found a few smaller scale figures in the spares box too I thought a photo illustrating the size of these 40mm figures might be fun. Image shows a Blue Moon 15mm, Hinton Hunt 20mm (I don't know where he came from, must have been when I was painting for Roy) and a 25mm Hinchliffe figure. The 40mm is interesting as I can't see him in the Sash & Sabre lists, he looks very Spanish to me, any ideas? Whatever he is he's a real character, cigar in hand. 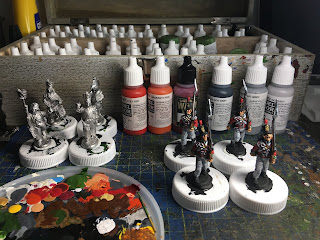 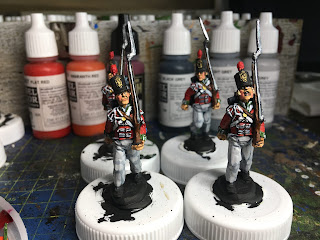 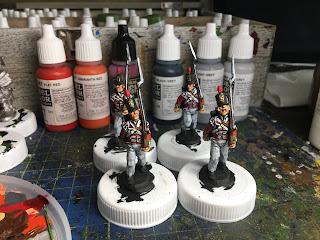