'Thinking out loud' ... a response to comments.

The comments left on my previous blog post have given me much to think about, and again I thank those who take the time to comment. I know I am not the greatest of wordsmiths, but it was important to me that I managed to get some of that stuff out of my head. I am now probably more decided now as to how to proceed than I was before the post, so firstly to answer some of the questions posed and then to try to expand upon points raised in the post itself.

To begin with the grid itself, I should emphasise that my plan was/is to make the table look as grid free as possible by only dotting in the corners, and then in a way that is barely visible to the eye. Whilst I know that grid games work for me and have done for many years now, I do believe that a more conventional terrain layout is what I'm looking for this time round. Back in 2012 when I was playing Commands & Colours Napoleonics with 6mm figures on a 3 ' x 4' table I tried to do the same thing, at least with the basic bare board. I think I got close to achieving what I was looking for, but of course there was no way of 'disguising' all of the terrain features that were built upon hexes, especially the hills, but I'm sure that with a square grid, very subtly marked out I can do even better this time. So what is the point of using a grid if I want to try to hide it? It's because I can't get my brain around grid free games these days, they just work for me, but as 'Norm' pointed out, beautiful they are not.

Here are a couple of images of my 2012 C&C set up to illustrate the method I used to try to blend in the actual hexes, it took a lot of work to get it to look like that, this time I have a different method in mind.

Next the issue of what units represent when placed in the grid. Twelve infantry figures in 2 ranks occupy a frontage of 120mm so sit comfortably in a square grid of 150mm, and when several such groups are placed side by side the appearance is that of a continuous line of troops, be they representing companies or battalions with a 30mm spacing between them that looks about right with 40mm model soldiers. Same for cavalry, four such occupy a frontage of 120mm by 70mm deep, and when placed in adjoining squares give the appearance of larger formations. The activation system I have in mind allows for adjoining formations to be moved together, so three infantry groups for example can be advanced on a common front to retain cohesion, with a command base attached to the centre group giving morale and control benefit to all three groups as per C&C. As for the artillery, well I see no reason not to deploy two such together on adjacent squares, treating them as a section but firing individually, they a big pieces in 40mm  scale and each will only fit into a single square.

Norm made a good point about the narrow depth of my infantry groups being only 50mm for the two ranks being quite wasteful in terms of table depth, but I want to be able to represent terrain features such as roads, rivers, woods, fields etc and especially buildings so the depth allows me to do this. Even with cavalry being 70mm deep it still allows depth for terrain features to be placed around them, if I were to double the cavalry to eight figures in two ranks it would leave no room for buildings sadly. This is the big compromise of using grids.

Ross Mac made a very good point about British infantry forming square, and of course one can't have a series of companies forming squares! So I guess this kind of decides the fact that what goes into one of my grids is going to have to represent a battalion at least, I can live with that. This means command bases will be at Brigade level, again something I can live with.

I have also had interesting discussion via email with David Crook, who is also working on grid based wargames ideas, and many of the points made have been absorbed into my plans. Conrad Kinch also kindly sent me a set of grid based rules he has been working on, and as one might imagine they are written in his usual humorous style and are a very good set of rules I could see myself using. What is clear to me is that there remains lots of options for using grids in wargames, my next stage is to get the table painted up and dotted out so I can illustrate some of these points raised above.

On the figure painting front I'm taking a short break from the infantry to paint a squadron of eight British Heavy Dragoons, the first four of which are assembled and undercoated as you can see. These are lovely chunky Sash & Sabre castings, and unlike the Light Dragoons the arms are cast on and only the sword hands need to fitted into the drilled out sockets. The bicorne heads are sculpted at slightly different angles which adds character to the soldiers. Should have these finished for next weeks update, I'm really forward to starting them. They will also eventually form a sixteen figure unit. In the pipeline I have French Line Chassuer a Cheval and also Cuirassiers - only the one unit in the Pensinsular I know, and wearing somewhat drab brown coats, but you gotta have some cuirassiers! I also have plans for a British Light Infantry battalion, so plenty of enthusiasm going forward. 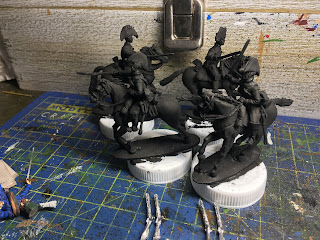 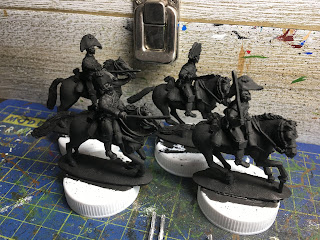