These are the first four figures of what will eventually become a full sixteen figure regiment. As I only have five figures left here I will paint another four for an eight figure squadron for the time being. As these Sash & Sabre castings are imported from the United States by Andy at Old Glory UK, I need to plan well ahead with my orders. Due shortly I have more British Heavy Dragoons and some Cuirassiers with command pack. Once they arrive more Chasseurs will go on the next order, I'm guessing for delivery in the New Year now.

You see them mostly finished save for final detail check and the addition of the carbines that plug neatly into a little hole in the upper leg. No varnish as yet either. I'm pleased with the faces, not perfect but on the whole pleasing to me with the slightly blushed cheeks. They took a lot of painting in terms of time and trying to get the contrast between the uniform shade and highlight, at one point I became slightly frustrated and put them aside for a couple of days while I turned to doing some more 14mm's for the 'figure per block' C&C project. These are progressing well now as you can see. I'm enjoying being able to paint a few at a time of different types, just starting on some French cavalry now, Dragoons to begin with. Once I have knocked out a few more cavalry units I'll get started on the artillery. I have a couple of British generals on the desk at the moment plus a couple more British Light Infantry as these should be 5 blocks not 4 so just making up the numbers on these. 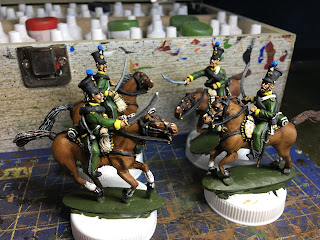 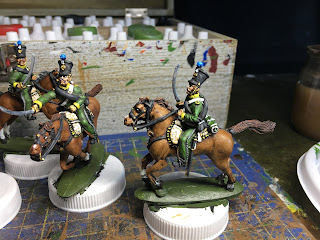 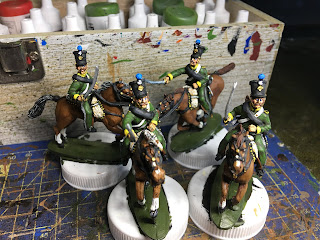 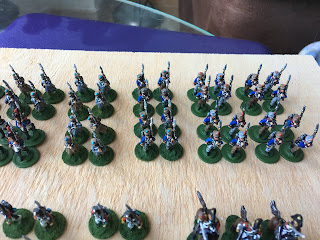 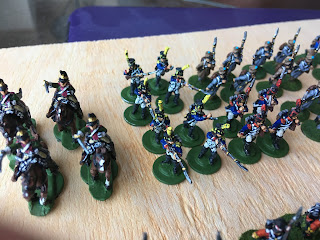 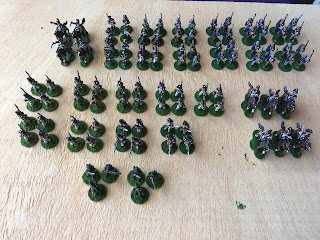 Finally for now, still no cask conditioned real ale to be found here on the Costa Blanca. I was hopeful of this place when told about it a few months ago, but alas no. I did enjoy a nice cold glass of Sidre Dulce sitting outside here in the sun today, but not exactly 'London Beer'. Ironically we had been looking at heaters as it's chilling down in the evenings now, but it was a pleasant 19 degrees late afternoon. 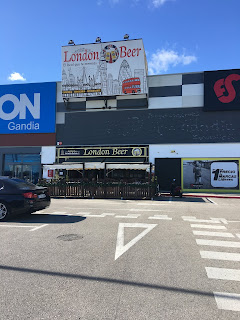