I managed to paint the first infantry figures from the Travel Battle sprues this week, plus an artillery base and officer bases. I must admit that I found it quite daunting at first, it's been a long time since I have painted anything quite this small! having base coated in black I began by picking out the blue coats followed by the white trousers. At that stage I was not too impressed with progress, only once I painted (dotted) in the flesh did the figures seem to 'come alive'. I then dotted in the red facings with a fine brush, followed by painting the cross belts carefully, laying the sprues flat and using both hands to steady the brush. The shakos were then given a brass plate and pom poms dotted in red and blue for a touch of contrast. At this stage I called it a day, deciding there was little point in attempting to add further detail at this scale. Once glued into their bases I felt quite satisfied with the results as you see below. I'm halfway  through the next blue sprue, leaving the cavalry until last, and as I have two sets to paint I have 8 sprues to work through in total.

I'm sure the fully finished results will be worth the work, just hope my old eyesight holds up! 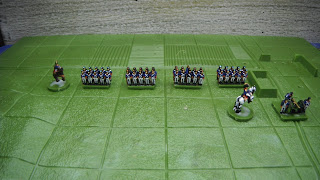 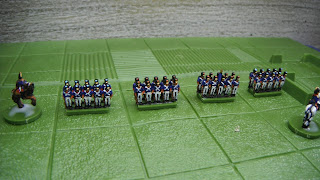 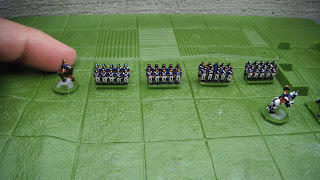 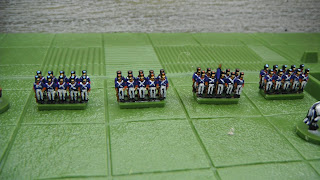 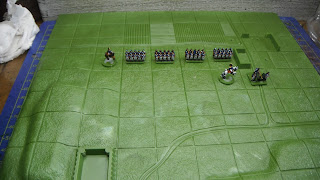