Sunday Morning again, the Sun is shining and over on the beach it's lovely and calm. I just watched a very skilled water skier making several fast runs up and down, looks great fun. With the Election looming and uncertainty over just how Brexit will pan out we have decided to hold off our planned move until end of Summer here, we are still going to Spain, but the house won't now go up for sale until September 1st. With that decided we invested in a garden hot tub (Laz-y-Spa) and I have been busy repairing and repainting the old garden shed to house it, it will go with the house sale as an additional feature, but meantime it's a little touch of the Spanish lifestyle we are looking for here on the Kent Coast and the kids and Granddaughters all love it! 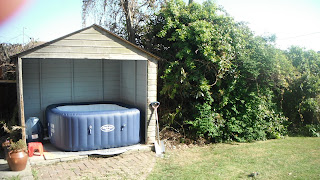 Had a break from painting the Travel Battle figures this week and returned to my Flames of war collection. I painted up a couple of German Howitzers that I had for some time and I'm pleased with how they turned out, metal Battlefront models, they will add a bit more indirect fire ability to my German forces. Version 4 has done away with the need for separate command teams, one gun being nominated as the command gun instead, so I marked this with a red square on the front and rear of one model.

The table is back up in the hobby room, the board size of 4' x 5' 6" fits comfortably in there, as it's only 9' long x 7' wide the slightly reduced length allows me to pass by without dragging any models off the table! I intend to play out some 'Flames of War' games as and when I feel like it. 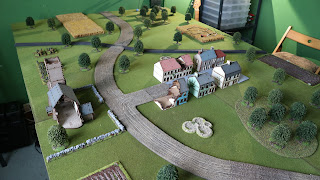 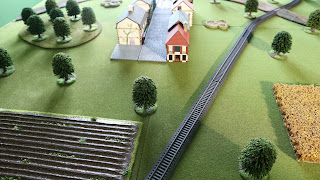 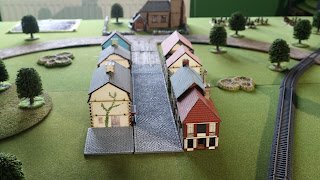 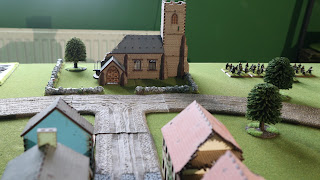 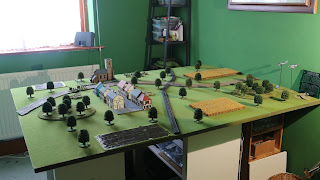 Finally for now.
I have been looking for another project to add to the FIW & FoW collections that are really both about finished now save a few bits and bobs such as replacing the Tigers. The Travel Battle sets will continue to get painted slowly as I must admit to finding it a bit of a strain on my old eyes. I tried ACW's in 28mm but they are just not doing it for me I'm afraid, wonderful figures but I really need something fresh and different. They do paint up well, but I'm calling it a day now on this one. 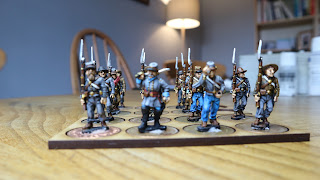 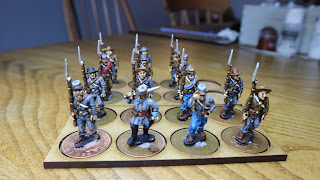 One thing I have long had at the back of my mind is to do my very own 'Nostalgia' project using Hinchliffe 25mm figures. My first 25mm collection back in the day was English Civil War and to this day I still admire that range, especially the cavalry, the first figures I painted was a unit of  Haselrig's 'Lobsters', inspired by an article in one of the magazines. That would have been around 1977 - 78 -ish when I was living in a bedsit in Blackheath, London, my parents having moved down to deepest Kent and I was serving my printing apprenticeship at Municipal Mutual Insurance, Great Queen Street, Westminster. In those days it was common to have a couple of pints during the lunch hours and my Manager introduced me to Courage Directors Bitter as part of my education, having guided me away from drinking lager and lime! Anyway, I digress, the picture was cut out of the magazine and put in a frame on my wall, amazingly I found the very image on the web and as you can see from below it was indeed an inspiring image. 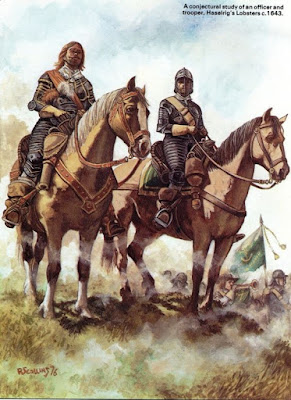 I have checked out the Hinchliffe range, now owned and sold by Hind's Figures and they do indeed still look good to me. I'm going to place a small order so I can see them in the flesh, but research on the 'Unfashionably  Shiny' blog has indicated just what can be done with them, along with figures from Peter Gilders collection, as used in the 'Battleground' Edgehill edition which can still be viewed HERE albeit somewhat blurry. The figures are old true scale 25mm castings, in the slim style of that time.


I'll be back with more on this once my samples arrive.