* A quick note re unit strength and my referral to 'block' losses, In C&C units generally comprise 3, 4 or 5 blocks, I'm basically doubling things up in figures, so for example a typical Regular infantry company comprises 8 figures, but are routed once they have lost 4 figures. In the case of more elite 5 block units such as Grenadiers they are removed on losing 5 figures etc. Artillery are 3 block units although I may have an extra crew figure present.

Next the French switch the attack to their left flank, sending the two Huron warbands forward. One  attacks a British gun killing the crew, but the British immediately respond with three companies of infantry moving up and routing the warband, forcing the attached Huron chief to make a 'Leader retreat' move having survived a casualty roll. Now the British Grenadiers can advance and immediately rout a French infantry company for the loss of just a single figure. Rangers attempt to drive Canadian Militia out of the captured log cabin, but with a -2 dice for attacking a defended building it's a tough call and they inflict just a single casualty, and in the battle back they also lose a figure. Regulars on both sides are now beginning to square up to each other for a firefight in the centre. At this stage the Victory Point count is 3 - 2 to the British. 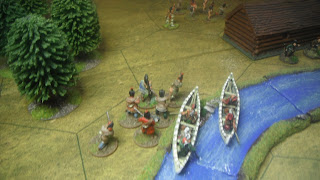 Things now take a turn for the worse for the British as the French Grenadiers supported by artillery decimate their counterparts, the commander surviving two casualty throws. he falls back to join his Highlanders, the two Company's formed up side by side and standing firm. The Canadian Militia now attack the lone British artillery piece and rout the crew, paving the way for a general French assault across the river. More British foot are moving up to counter them, including blue coated Virginians under a young  Colonel George Washington, but it's now 5-3 in Victory points to the French and they are across the river in strength.

The finale will follow tomorrow, I can't see the British winning this game. So far I'm pleased with how it's reflecting the FIW style of fighting, I may have to look at my 'Indian' charts again to capture the speed and brutality of a Huron attack.