Battle in the Wilderness -the conclusion.

Sunday again already, and having caught up with last nights Match of The Day - I avoid the results on Saturday where I can - It's time to play out the final phase of the French & Indian War battle set up in the dining room before clearing the table.

On a side note my two copies of  'Travel Battle' have been dispatched by Perry Miniatures so I'm hoping they will arrive soon so that I can start painting them later this week. Those who have seen the step by step painting guide on the Perry Facebook page will know the potential of the plastic sprues. Incidentally, Perry have confirmed that they do plan to make the individual sprues available shorty, and I very much doubt it will stop there.

So, onto the game, French just 1 Victory point from winning, the British need to be very cautious now in their Command Card choices, preserving damaged units and trying to get fresh units up to the front line. The French are pouring across the shallow river, Regular infantry including the Grenadier Company who remain at full strength. They are a 5 'block' company who roll a massive 6 dice in non moving volley fire and melee so morale is high.

It's the British turn but cards are limited, mostly flank attacks but there is a 'Coordinated attack' card in hand which allows one unit on each flank and two in the centre to be activated, the Virginians and a company of the 1st Regiment of Foot move up and fire volleys into the French Grenadiers and Canadian Militia, the latter rout but the Grenadiers stand firm with light casualties and on the next turn they return fire with devastating effect. But it's a final attack from one Huron Warband against a British infantry unit, already reduced to a single 'block' that wins the final VP and the game 6 - 3 to the French.

The British retire from the field and concede the victory. There are still units uncommited including the two Iroquois warbands on the British left, but the game became very much focused on the action in the centre where the French concentrated their attack. I could have played on a little longer, but doubt it would have changed things much. All in all a very enjoyable solo game with the C&C system doing it's stuff as I would have hoped. I liked moving the individual figures, a real old school game of toy soldiers, but also felt that it captured the period feel well. Plenty of 'Leader Casualty' rolls  added to the tension but not a single commander was hit. The Indians were quite effective - I give them an extra dice on melee throws to represent their prowess at hand to hand fighting with clubs and tomahawks. 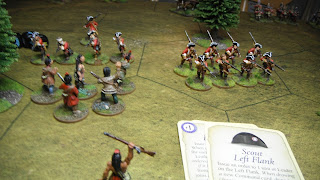 I apologise once again for the picture quality, I was trying to light the action with one hand whilst holding the camera in the other, I hope to improve the lighting for next time and borrow my daughters tripod!