My Sunday morning routine normally sees me out early with the dogs, followed by watching the previous evenings Match of The Day recorded on Sky. This morning however it had not recorded because the powers that be in their great wisdom had switched MoTD over to BBC2 to make way for the Eurovision Song Contest! I really was not amused, especially as I had - as usual - carefully avoided the results on Saturday. I have no idea who won the damn thing and I really don't care, I saw a few clips earlier in the week of some entries, that seemed to me to be stuck in a previous decade (or century?) bland, repetitive and cringe worthy. I apologise to those who might actually enjoy this stuff, but it's really not my cup of tea at all.

Anyway, with no footie to catch up with I sat down and painted these tiny Hussars from the Travel Battle set. Took around an hour, again carefully picking out the colours whilst leaving some black to give depth and shade. Enjoyed doing the horses, the figures are just generic French hussars. So now I have painted all of the French figures from one TB box. The rules state that each players begins by dividing his army into three Brigades, each commanded by a Brigadier mounted figure. What you see is two infantry brigades of 4 units with attached artillery battery, and a cavalry brigade. You can use any combination so long as it's just three brigades. I'm going to paint the other two blue sprues next before starting the British. This will give me six brigades per side under the rules. 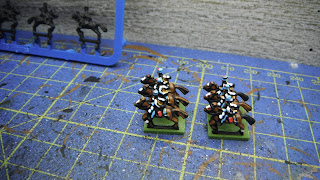 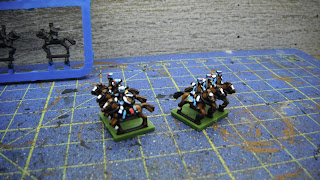 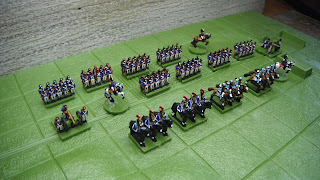 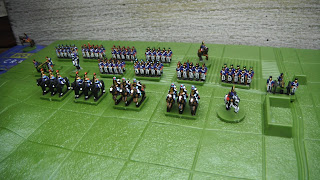 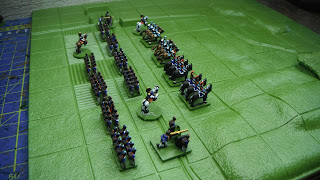