* Apologies for the poor picture quality, light is poor in the dining room on gloomy grey days!

The British begin with an advance in the centre, the gunners of both 6 Pounders toiling to drag their guns forwards supported by infantry. The French make an initial advance on their right, Indians moving into the heavy woods as a company of Regulars follows. The British Grenadiers lead the way in the centre supported by the Highlanders as the Light infantry move into musket range of one French gun and open an ineffective moving fire upon it. On the opposite side of the river Canadian Militia skirmish forward to the banks. A general advance in the British centre and left follows, the right remaining static for now. The bulk of the French infantry remain on the baseline, they have a useful 'Bayonet Charge' card in hand which will give five units a two hex move up to the riverbank (and battle in melee combat) but their advance is currently blocked by the Canadians so they hold position for the time being. One band of Indians on the French side has used it's canoe move and disembarked on the 'British' side of the river. close to dense woods. There has been an exchange of artillery fire, but ineffective in the wooded terrain at long range.

General Braddock's plan is to get his men into a strong forward position and to await the French advance across the river, but there will be plenty of action beforehand no doubt as both sides skirmish forward. Montcalm's plan is to soften up the British centre using the Canadians and Indians before sending his regulars forward into musketry range where he hopes the steady volleys from six companies side by side will be destructive. 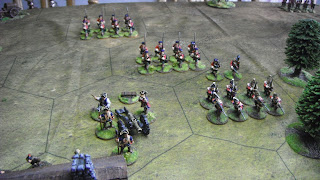 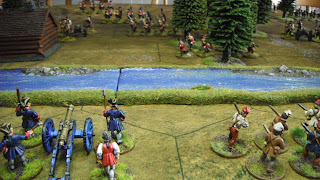 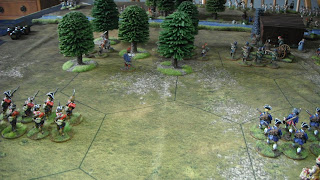 The fighting in the centre now becomes desperate as the Canadian Militia cross the river on an 'Elan' card and engage the Light infantry in the woods in melee combat. The Lights lose 3 men to French artillery fire and melee combat leaving them in imminent danger of routing. The British foot are holding back, as an advance will block the line of sight of both artillery pieces, yet fire from both guns is mostly ineffective, killing one of the Canadian Militia only. The second Militia unit has seized one of the settlers cabins across the river. It's a typical C&C dilemma now for the British, they need to push the infantry forward urgently but the Light Company in the woods are just a single 'block' away from routing and giving first blood (Victory Point) to the French. There is a 'Rally' card in hand however and this is played. This card allows you to throw one dice for each command card held, and rally one 'block' of the type thrown, it's a desperate measure but the roll is good returning two figures to the Light Company, who now being considered 'ordered' engage the Canadians in hand to hand fighting and rout them for the first VP. Meanwhile the French Regulars have advanced in force to the river and make ready to fire. 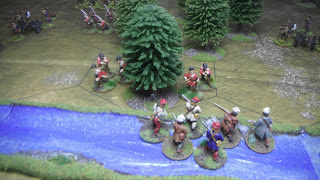 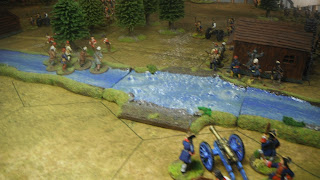 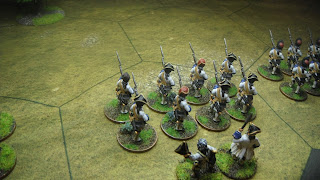 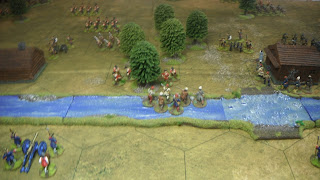 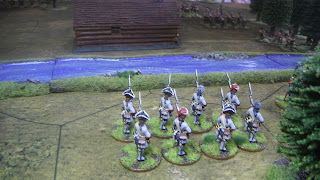 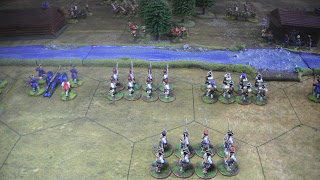