My French & Indian War collection has been packed away in boxes for several months now and a peep inside a few days ago made me want to get them out and play with them! They remain very much my pride and joy in terms of collection, but have seen little action on the tabletop. I had been working on some charts that would enable them to be used with adapted Commands & Colors Napoleonic rules on the large hex mat I bought recently, mostly based upon the 'unofficial' AWI version on the C&CN website.

For those familiar with the C&C system I took the basic stats of numerous troop types and adapted them for the FIW. This is not a difficult thing to do, so British and French Regulars remain very much as was as do Light infantry and Grenadiers. Canadian Militia and Provincials etc are based on 'Militia' stats with a few tweaks while Indians have a chart created for them that reflects their speed and agility, they retire 2 hexes per flag but their strength lies in close combat where they are described as 'savage fighters'. Artillery use the Napoleonic stats pretty much as they stand. On the British side there is one small cavalry unit, research suggests they were actually provincial cavalry, poorly equipped and horsed, under General Braddock's command, cavalry generally being considered unsuitable for the terrain, but I painted them so they get to take part in the battle! I should add that the 5 figures in the unit are actually Dragoons from the Front Rank 'Culloden' range, I liked them so much I had to paint a few. There is also evidence of French light cavalry at Quebec, although these did not get into the fight, Redoubt Miniatures do  produce these as part of their FIW range so I may add a few later. If anyone has any further info on cavalry in the FIW I would be grateful for links etc.

The table is the standard 13 x 9 hexes and considered lightly wooded throughout with areas of denser woods and a couple of settlers wooden huts. A river flows across as seen below. I don't yet have any hills made unfortunately but I'm working on them. The hexes are 6" and it just about fits onto a 7' x 4' table.

I decided to remove all figures from their storage trays and move them individually as I felt this would better reflect the non rigid formations of the conflict. I use 8 figures to represent a 4 'block' unit, 6 to represent a 3 'block' unit etc. I'll play the British Horse as a 'Cossack' style 2 block unit, very vulnerable but useful for scouting. Artillery are standard 3 block units. Commanders are represented by foot figures, in this case a commander and musician, while my standard bearers (6 per side) will act as 'Victory Points' as per the rules.

Initial deployment as shown below, 5 command cards per side and 6 VP's for the win. I'm using the standard deck with some cards removed as I'll discuss later. I'm not at this stage using the tactician cards and new deck from Expansion 5.

The great thing about C&C is that you are straight into the action from the first command card drawn, the cards drive the game so it works well for solo play. I simply play both hands as best I can. When a card is thrown and replaced I don't look at it until it's time to select a command card to play. I should add that C&C rules are firmly embedded in the old Brainbox from several years of play, so I won't hit the wall I did with my last attempted FOW game.

Scenario: The British force has been ordered to prevent the French/Indian force from crossing the river and seizing control of the settlers land. The settlers will fight to defend their property, but are poorly armed. The 2 Indian Warbands on the French side can use the canoes to move up and down the river if they wish, moving 3 hexes per turn.They cannot battle on the turn they embark or disembark. River stops movement as per rules unless crossing at the ford or bridge. British move first. 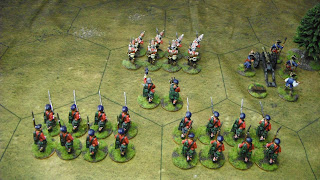 These pictures are poorer quality but show initial disposition of both armies. 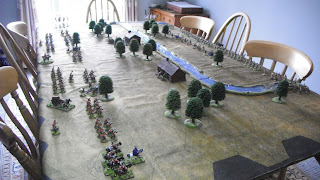