Sunday morning again already, and I'm just back from an extremely wet dog walk, pouring with rain and howling wind but the hounds still need to be walked!

This week has been busy on the domestic front with new carpets and all of the furniture shifting that goes with it, as well as running a wheelchair bound friend to the GP and then to the local hospital for blood tests and an X Ray. Of course nothing goes as planned, the X Ray machine at Folkestone was out of order so we drove onto Dover passing the Battle of Britain Memorial on top of the Cliffs before dropping down into Dover Town Centre, a rather grimy place these days but full of magnificent Victorian architecture that tells of it's more prosperous past. We arrived at the hospital only to be told that the X Ray department had just closed for a lunch hour ...... what! in this day and age? .... so rather than sit about for an hour we gave up and drove back. We will try again during the coming week.

I  still managed a bit of hobby time and completed the German infantry platoon of 35 figures (I like 5 figures per base for my rifle/mg teams). These were painted after gluing down on the bases and priming as usual and turned out not too bad, my aim being to capture the tones of the 'Splinter' or Splittermuster camouflage on the figures wearing the Zeltbahn Poncho. The figures are by Peter Pig and I especially like the MG42 being fired over the shoulder of the ammo carrier, as often seen in news reel footage. 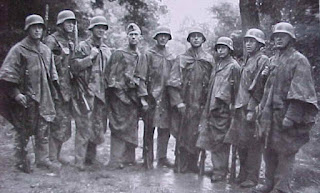 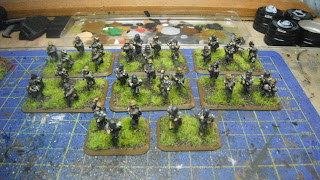 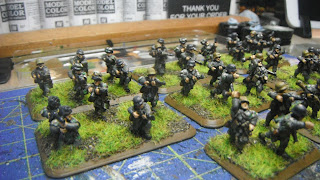 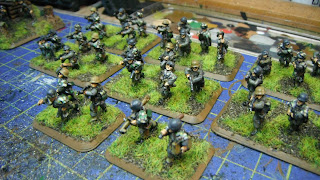 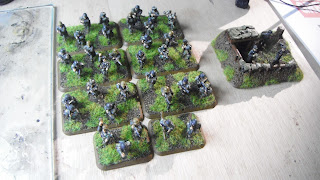 I also painted the Battlefront German HQ Objective marker, a nice little model to which I may add a flag, probably not accurate but I like flags! 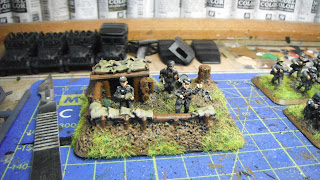 The 4Ground order arrived and I'm keen to get building, the church looks good as does the cafe Grondree. The description on the 4Ground site for this model is quite interesting as it was the first French house to be Liberated on D Day. I also ordered some telegraph poles to run along the hedgerows.

Georges and Thérèsa Gondrée settled in a small Café next to Bénouville bridge after meeting at Cannes.  Georges, was an ex-banker with Lloyds and due to this was fluent in English, Thérèsa was from Alsace and could speak fluent German.  At the time of the invasion the Gondrées had three children and as their dissatisfaction grew toward the German invaders they started to support the resistance in Caen with information about the German Garrison.

In the run up to D-Day, the Gondrées provided a huge amount of information to the British through Thérèsa being able to understand German conversations as she never let the German’s know she could speak their language.  This information became vital in Major Howard’s planning for his Coup De Main attack by his D-Company of the Ox and Bucks light infantry.  The information was critical and promptly provided, for example they enabled Major Howard to know the exact location of the explosive triggers in a bunker near the bridge that would blow up the bridge.

On the morning of the 6th of June 1944 the Gondrées were rudely awakened by the sound of gunfire and explosions, Georges made his way to the window where he was shot at by a British soldier mistaking him as a German Soldier.  He then took his family down to the cellar to await the outcome.  Later that day he and Thérèsa had been trying to discern the nationality of the soldiers and had decided that they were not German.  Not long afterward there was a knock at the door and Georges met two British Paratroopers, who he showed around so they would be sure there were no German soldiers inside.  Georges and Thérèsa were overcome with joy at the liberation and provided champagne to passing soldiers for the rest of the day.

Café Gondrée has the distinction of being the first French house liberated on D-Day. 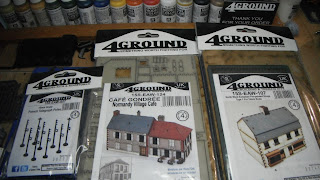 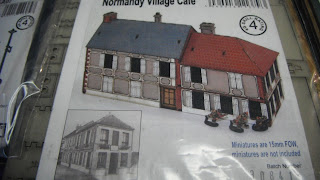 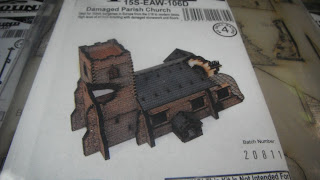 And finally for now a big thanks to 'Norm' for adding the link to the Airfix resin fountain model, it has had a quick paint job and fits nicely into the centre of my Town Square. You see it below in all it's magnificence with two 'big cats' moving menacingly around it, they are of course Panzer VI Königstiger ( King Tiger) models by Forged in Battle. 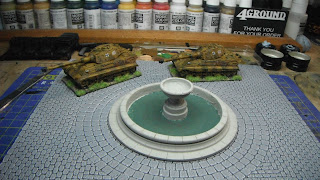 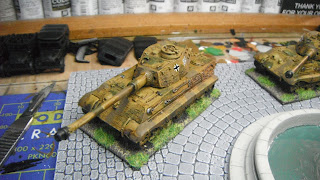 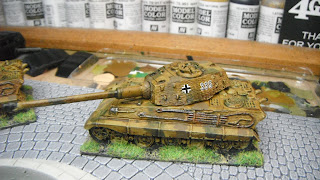 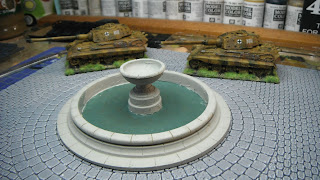