I went a bit crazy last weekend, as my head filled with visions of vast numbers of 28mm ACW's and a return to Johnny Reb. I had also been planning an expansion into a 15mm British army for Flames of War. However this week has seen a reality check as I contemplate the future, and as a result I'm in more sensible mode now and my plans have been scaled back. Fact is that the upstairs hobby room is crammed with figures and terrain already, despite the sale of all my Bolt Action stuff and my 15mm Soviets, Most of the cash was ploughed back into Front Rank FIW figures, more 'Battlefront' terrain ( rural and cobbled roads, railway track, town square etc), and a hefty purchase of Renegade ACW's. I have had to remind myself that the ACW project was intended for Sharp Practice, and that about 60 figures per side was all that was required, at least initially, so I'm going to stick to that.

As for Flames of War, I have made up my mind to stick with US v Germans, Normandy Campaign and to continue to flesh out those lists. I'm adding to my 2nd Armoured Division with trucks to transport the infantry, more Sherman's (don't need them but have them and enjoy building them), and a platoon of Airborne from the 'Open Fire' box. I was looking for more of the plastic Airborne figures on eBay when I came across this wonderful set of 'Easy Company' characters, metal 'Battlefront' castings which will fill out the ranks of the platoon perfectly. I also ordered some metal Cullen hedge cutters to fit to a few of the Shermans, useful for cutting through that Bocage.


I finished off the first 8 American Civil War figures earlier in the week, adding bread bags and canteen straps, the next 8 are primed and ready. 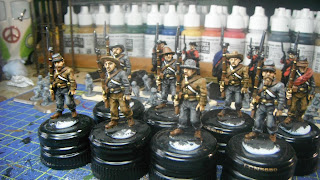 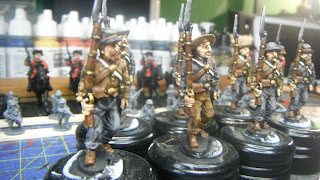 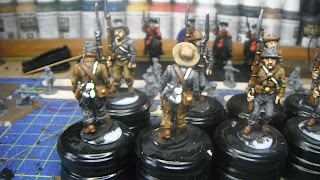 I also built the 4Ground model of Cafe Gondree, took just a couple of hours this one, it's a level 4 kit but I found it very straightforward once I worked out that some parts had been mis numbered on the instruction sheet. Chimneys a bit fiddly, so many tiny parts, but I guess I'm used to these MDF kits by now. 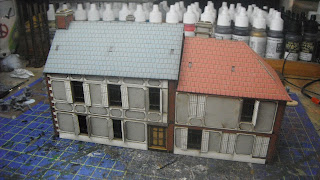 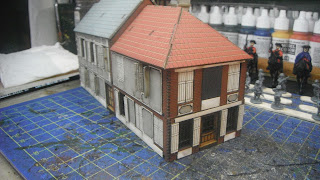 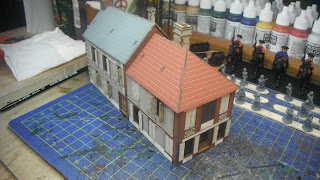 Oh, and the point of this post was that we are planning a move to Spain, a permanent move that we have been planning and researching for several years. We have settled upon Valencia and started learning the language. Recent weeks have been busy preparing the house for sale, much upheaval with painting and new carpets, clearing out the loft and garage. We are now at the point of engaging solicitors both here and in Spain, the time is right for us to make this move and we have a long checklist of things to do. It's a daunting but exciting prospect, there will be less and less hobby time in the weeks ahead, thus the need to reign myself in and be more realistic.
Posted by 'Lee. at 04:07