Two posts in a weekend, I must be on a roll! Having undercoated eight of the Renegade ACW's I could not resist getting some paint on them, and as usual when I start something new I like to record the method and shades used in order to retain consistency along the way.

To begin with I had already decided to go for a 'quick' paint job on these, using a controlled dry brush to get down the basic colours before adding highlights followed by an ink wash to add a little depth and to bring the shades together. For these Rebs I wanted to stick with a limited palette rather than a mish-mash of browns, greys and creams etc. I went for my trusty' London Grey' as a base dry brush, and 'Flat Earth' for the 'Butternut'. I use all Vallejo shades apart from the brown I use for Reb belts,  boots, cartridge boxes etc, for which I stick with Citadel 'Mournfang Brown' as I simply can't find anything to match it in the entire Vallejo range. I order all of my paint supplies from 'S&M Stuff' online so I pick up a couple of bottles of the Mournfang when I top up my Vallejo's.

OK, so to get started the figures were hand undercoated using Vallejo matt black rather than primer, reason being is that it gives a completely flat, shine free basecoat for the drybrushing. Once dry the drybrushing begins with London Grey and Flat Earth, some as you see are fully grey others a mix of Grey and Flat Earth, just the two basic shades to set the overall tones. Next batch I'll introduce a few light blue 'Liberated' Yankee trousers maybe for a touch more contrast but that will be it. I chose both the main shades not just for the colour, but also the fact that both come up quite thick which is perfect for drybrushing. Both also take the highlight shade well. I use an old small brush, allowing just a small amount of dryish paint, what I want to avoid is too much paint going on and obscuring the black around the details, a quick light brush over is required. I hit the belts too as its far easier to paint over these than paint a round them later, but being careful to leave the edges showing the black undercoat wherever possible as shown below.

I then paint the flesh shade colour - Light Brown - followed by the Citadel Mounfang Brown on some belts, the boots, cartridge boxes and percussion cap pouch. I leave the canteen strap and breadbag for a little variation later. I then highlight the flesh with Sunny Skin Tone. At this stage the basic shades are established ready for highlighting, this took me only around 30 minutes to get them as shown below, it really is that fast! You can see the base shades are quite patchy but highlights will improve that later. 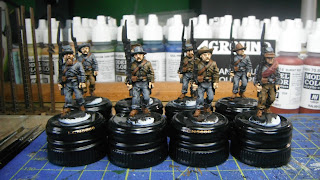 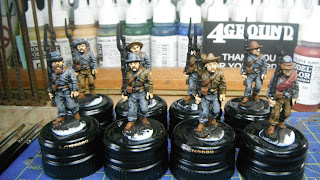 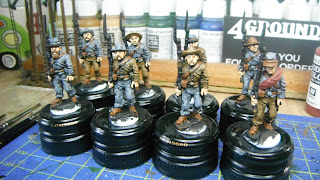 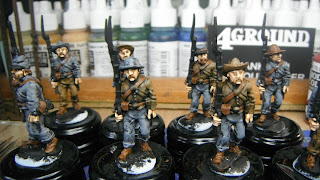 I don't go in for eyes, this is my standard method of painting faces using just the two tones. So next it's the main uniform highlights and for this I use Sea Grey over the London Grey and for the Butternut I use the Flat Earth with about 25% Ivory mixed in. A quick job picking out the light areas but again leaving the base coat to provide shade and we arrive at this stage. 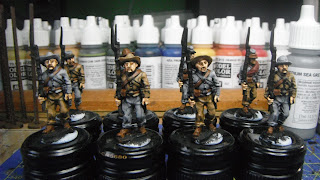 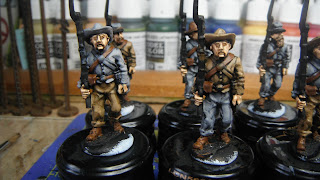 Next I painted in the brasswork - Vallejo Brass of course - and at this stage I had been painting for exactly one hour and it was time to pop downstairs to catch Football Focus whilst tidying up! A couple of hours later I felt I just had to get in a little more painting on them, so I added the Brass barrel bands and trigger guards to the as yet unpainted muskets. At this stage they were ready for an ink wash to the main uniform areas. I used Sepia for the butternut areas and Black for the grey areas, I tend to thin down the inks slightly with water and work carefully with a small brush to control where the ink goes, I only really want it to run into the folds and creases, I don't want to get any on the flesh areas. The blanket roll was painted with Burnt Red highlighted with a touch of Scarlet while wet so it blends. 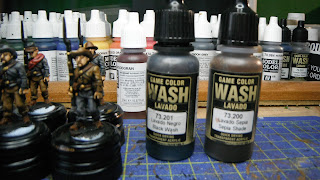 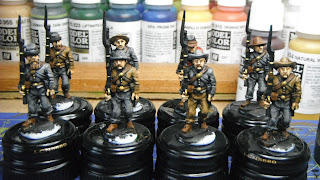 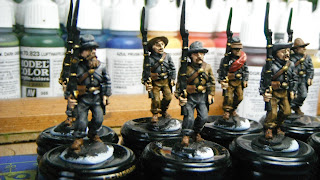 This second session was shorter, around half an hour, but the figures already look close to finishing. Part 2 will see me completing the muskets, bread bags, canteen straps and any other detail. They will then be set aside while I undercoat the next 8 figures with the 4 figure command base being left to last. I can accurately say that the time will be around 2 hours from start to finish for 8 figures, pretty good going. The Yankees should be a tad faster.