Latest addition to my Bolt Action German forces is this Nebelwerfer, multiple rocket launcher, nicknamed by allied troops 'Moaning Minnie' due to the noise it made when firing. It's a Warlord Games model as are the crew. I'm pleased with the weathering effect, I wanted to capture the blackening around the barrels and a slight rusting here and there. The usual Vallejo 'Middletone' was drybrushed over a black undercoat, and then a touch of golden yellow mixed in for highlights. 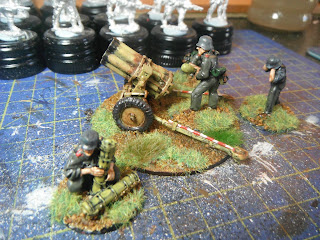 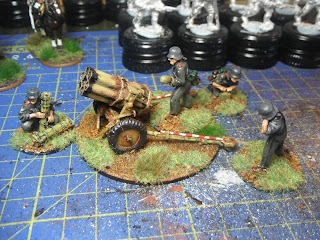 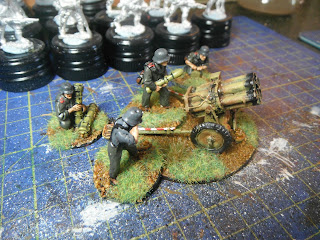 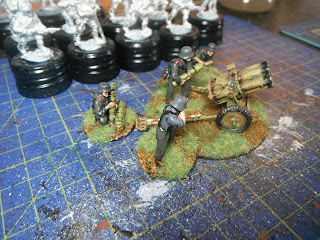 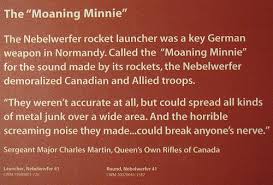 In Bolt Action terms the Nebelwerfer is classed as a multiple rocket launcher and counts as a 'heavy mortar' when firing. To reflect the extensive potential blast area any units within 6" of the nominated target (friend and foe) could be hit. You roll to hit the target and then any unit within 6" so it's slightly unpredictable. Certainly the morale impact was devastating as described above.

For my US platoon I have completed a second 30 cal browning MMG team and have a third on order. The US army lists allow up to three such to be taken as a single selection to represent the high numbers assigned to the infantry. Each MMG team has three crew, with the spare loader being based separately. 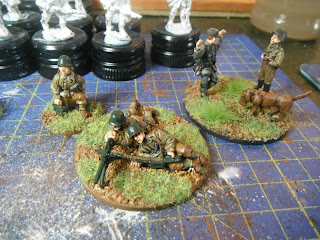 BA second edition is only a couple of weeks away now and it is revealed that all machine guns will now get an extra dice on the' to hit' roll, so this means a US 30 cal. will now roll 5 dice, while on the German side 'Hitlers Buzzsaw' the MG42 will roll no less than 6 dice when deployed as a fixed team. This additional dice for German MG teams represents the quality of both the weapon and the training of it's crew. Within squads where the MG42 is carried in Light Machine Gun mode, (not deployed on its tripod, often steadied over the shoulder of the loader for example), the two figures now put out 5 shots/dice AND can advance and fire on an 'Advance' order (-1 for moving and firing). This flexibility and firepower is one reason I enjoy playing German and with an MG42 (LMG) being carried in each of my 6 squads, together with a mix of bolt action rifles and assault rifles they are a force to be reckoned with. This together with the initiative training of the German infantryman that allows a fallen squad sergeant to be replaced from the ranks thus avoiding the -1 morale penalty, can seem an overwhelming advantage against my US platoon, but is balanced by the US special rules such as more MMG's and the fact that they do not suffer the 'Move and Fire' penalty so no -1 when firing on an 'Advance' order to reflect the 'Fire and Manoeuvre' training, and of course each squad includes a Browning Automatic Rifle (BAR), so you can see how nicely Bolt Action balances things up.

Another thing I hear is that dense woods WILL now block LOS, a victory for common sense. If you would like to hear more on the forthcoming 'tweaks' to the BA rules this video is well worth a watch.
(Fast forward 1 minute to avoid the advertising blurb!). It's a game of BA played to the new rules at a good pace by experienced players and the guy from Warlord umpiring and explaining the changes as it goes along.


And finally ..... the hobby room is painted, just need to improve the lighting now and put the blind up and it's ready to play some games. 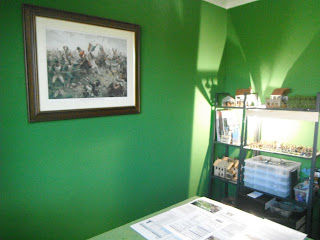 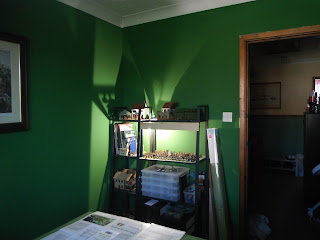 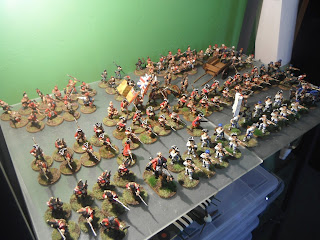 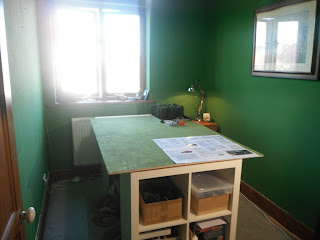