With the long run of fine hot weather continuing, Dymchurch has been incredibly busy, and like most locals we have avoided the village and the beach during the day, preferring to venture out early in the morning or in the evening. We did pop over to the' City' midweek as they currently have Young's Special on offer, an old favourite of mine, and I was pretty shocked to see so many people in swimming or generally splashing about, and some very sunburned bodies!

Bolt Action scenario.
Having set up my table yesterday afternoon for a game of Bolt Action I was out with the dogs before 8am this morning and once I have had my coffee and breakfast I intend to play through a scenario that will feature random entry based on a die roll with the aim being to reach a single centrally placed objective, pick up a secret document and return it to table edge to win the game. This will be an infantry only game at platoon level, no artillery or heavy armour. The twist is that only the commanding officers of both sides are aware of the document so it's a race to see which side can get the HQ team onto the objective first. To avoid everything rushing on directly opposite the objective, both platoons will start off table, and when an order dice is pulled the chosen unit will roll a dice to see where they can come on. I have my new TSS terrain boards laid out so the table is the full 6 x 4, and the roll will determine simply left , centre or right tile to enter. And just to add a littler more spark to the game, the commander that grabs the objective will also fire a flare to call in an airstrike against a selected target.

The forces will be roughly balanced, I'm not bothering to point things up but will comprise the following:

HQ team as above. (I decided to keep the medics as part of the HQ team as obviously officers are going to be targeted in this game so it just gives a chance of a medic save if the worst happens)
4 squads of 12 regular infantry, each with a BAR.
3 x Browning 30 Cal MMG teams
1 medium mortar team
1 sniper team
1 Stuart Light tank.

It's a good mix with plenty of machine guns, the Stuart is offset by the Youth squad with its panzerfausts (one shot, shaped charge, range 12"), no transports in this game to keep the number of order dice down. I'm counting both commanders as First Lieutenant/Oberleutnant (veteran), so both give a +2 morale bonus. The medic can save on a roll of 6, and in this case I'll allow the save to be made even in the case of 'exceptional damage' as it's a small chance only after all.

Terrain set up as below, you can see the objective on the road roughly centre of table. There is an orchard that blocks LOS as do woods beyond the first 6". Hedges do not block LOS in this instance, but give a -1 soft cover modifier as normal. Buildings and walls give -2 hard cover modifier, a score of 12 in a single turn from HE can destroy a building completely, but with only medium mortars on the table that's not going to happen. The Typhoon and ME262 are ready to make a ground attack run, depending upon who gets to fire the signal flare first. 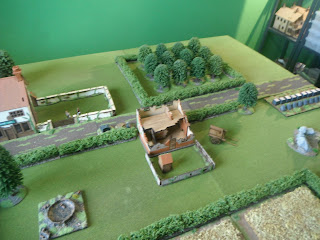 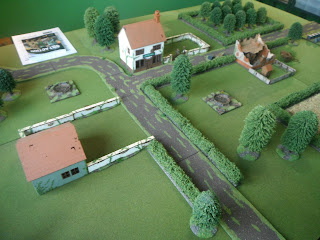 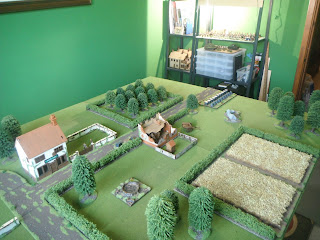 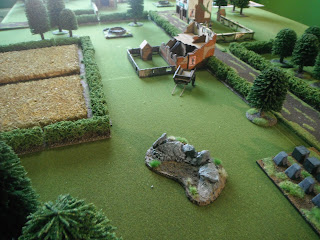