There can be few uniforms as iconic as that of the 18th Century British Grenadier with the tall mitre caps. I recall as a young man visiting Greenwich Maritime Museum, with it's 'Quebec' display (General Wolfe lived in a house within the grounds of Greenwich Park unless my memory let's me down!), and seeing examples of the elaborately embroidered mitres. I'm certain it was one of the big influences that got me into wargaming at that time.

These 8 figures took an awful lot of painting, but I enjoyed doing them. I might still go back and line the cuffs between the buff and the white 'lace' to help it stand out more, and try to tidy up the 'GR' on the mitres. I used a fine brush but wonder if a fine liner pen would give a neater result. I also painted an additional officer alongside them. All are by Front Rank and intended for Sharpe Practice FIW. Just two more 'companies' to complete the battalion of 48 figures. In SP British Regulars are fielded in groups of 8 soldiers. 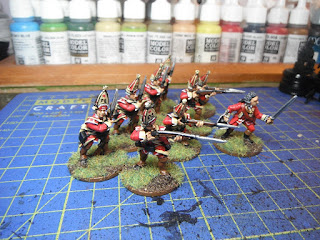 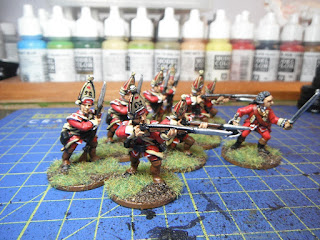 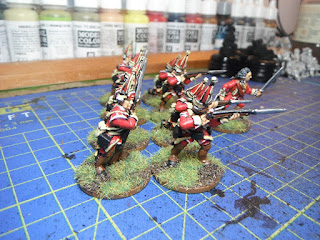 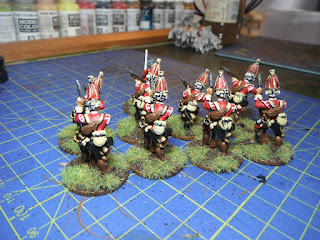 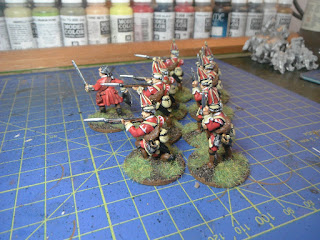 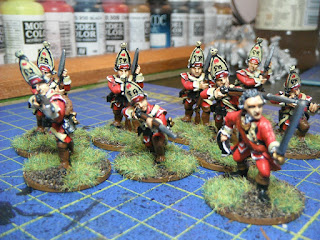 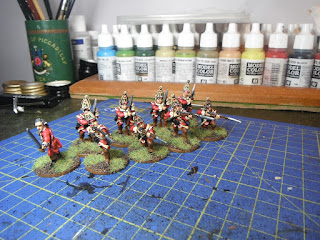 Next will be 2 field guns (Front Rank), for the artillery crews John is currently painting for me, and then 2 mounted generals (FR). My plan is that John will finish off the rest of the SP figures, I have more due back early next week and end of August John is going to paint a box of Warlord French line plus an additional infantry pack making 3 companies of line to add to the 2 I have painted myself, plus the Last of The Mohicans personalty set. At that point I might well say the project is about done, bearing in mind SP is a 'large skirmish' game. I still have some 20mm plastic priests to paint for CK before I move onto anything else.

I also picked up another squad of Germans for BA via eBay, from John at Kingscolours, just could not resist them! These represent a Waffen SS squad, but I'll put that from my mind, I just liked the painting of the cammo smocks and the MG 42 being fired over the loaders shoulder.

With templates being introduced for HE shots in BA v2 it will become necessary to maintain the maximum permitted 1" spacing between troops, so I just spaced the squad out to see how it looks, not much I can about the LMG - or come to that all of my US, German and Soviet teams which are based on 30mm bases with figures huddled together around the weapon - but I have no intention of rebasing anything, I'll just have to take the hit! 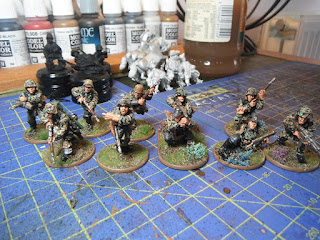 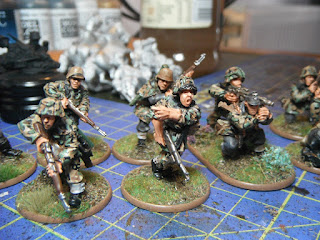 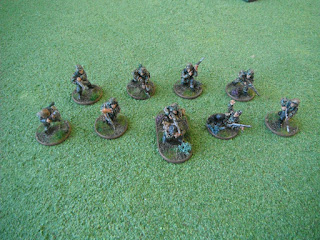 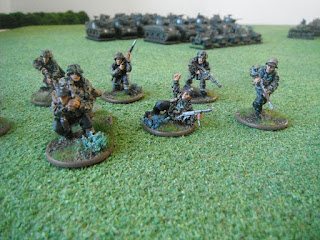 Got the paint for the hobby room, went for a nice flat green, I'll get that done possibly Sunday then I need to move onto the hall and stairs to freshen things up. 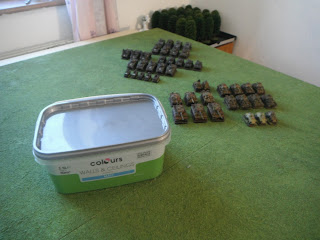