I'm quite pleased with how the command group turned out, the Commissar looks pretty menacing, ready to pull his pistol to shoot anybody refusing to advance under the 'Not One Step back' rule!

Not One Step Back is a new rule that uses Commisars to exhort your troops to greater glory. Commisars count as officers but do not provide Morale bonus to nearby troops, however when a friendly unit within 6" fails an order test you remove one model from that unit and re roll the dice...there is no choice in this matter! The Commisar sees all and will not hesitate to shoot!


I bought a couple of packs of tank riders, five figures per pack,  three per tank will look about right. Must admit they got a fairly fast paint job, but the final highlight seemed to life them a bit. IN Bolt Action tank rider squads can be quickly pushed forward, and one thing I am learning about this game is that speed is of the essence when you only have six turns to win the game. To this effect I'm adding more German half tracks to be used as transports, a typical vehicle being capable of carrying a full strength Grenadier squad.

Pics show Soviet HQ group completed and the newly built T34/76mm ready for painting, it will also get tank riders. 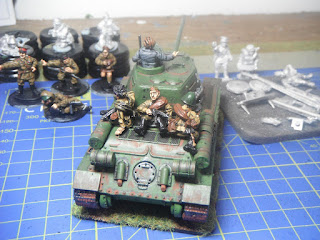