BA scenario ' Demolition' the set up.

With the weather now turning more spring like here on the Kent coast I'm ready to have a good tidy up of the garden, which includes replacing some fence panels lost in the gales over winter, we seem to lose a couple at least every year.

Indoors things are going well with my middle daughter and partner living with us while they try to save up. Blake being a very easy going young man, above 6 feet tall in height, has been useful in clearing the gutters and other such jobs, and is handy with power tools! He's also challenged me to a game of Bolt Action, as he's a former Warhammer player, so once I'm confident with the rules we will have a game.

So, with the Typhoon ready to go I have chosen the 'Demolition' scenario to play through, this time featuring the light howitzers in order to get a feel for the artillery rules and especially the indirect fire 'smoke' rules which look useful in the right situation. I will give the US force the opportunity to attempt to call in 2 airstrikes as per the US special rules. On the subject of special rules for different forces I think it was' Dai' who mentioned the rule re German NCO casualties, which allows German squads to replace a fallen NCO with another guy from the ranks to represent the Germans initiative training, got that in mind this time as well as remembering medic rolls. The attacker (once decided) gets to attempt to call in a preliminary artillery barrage before assaulting the enemy position.

As you can see I have re set the table for this game and have tried to create more sight lines and open spaces as well as plenty of cover further back from centre. This time I have avoided lining the roads both sides with hedgerows and tried to create a more 'open' terrain. It will be 1.000 points per side roughly.

The table set up for 'Demolition' 6 turns, roll at end of turn 6 for a possible final 7th turn. Scenario notes below, (objectives will be placed as per rules before game starts).

"Our scout planes have pinpointed the enemy HQ, your objective is to reach the enemy position and destroy it using the explosives your men have been issued with. Strong resistance is to be expected, so you must attack in force, but do leave a portion of your force behind in order to defend our own artillery emplacements" 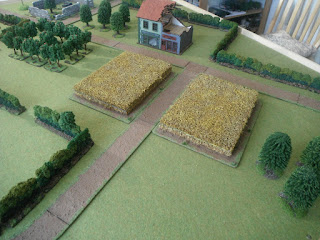 So next will follow the army lists and the game, I considered giving the Tiger it's first run out (for almost 500 of the 1000 points total!), but in the wrong situation the 'fuel supply' rule could leave it vulnerable and anyway the assault gun commanders were not happy and complained to HQ. I may well give the little Panzer III a run as a medium anti tank gun to see how it performs against the Sherman for a lot less points, no idea how it found its way to Normandy being largely obsolete by 1944, but that's the fun of Bolt Action. 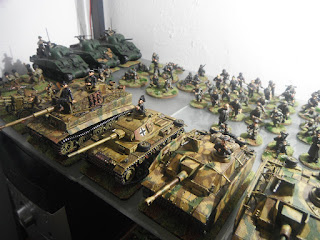