Expanding into 'Tank War, and a slight Russian diversion!

I guess one of the advantages of being an 'over 55' is that you begin to gain benefits from the early years of working and saving, and having taken advantage of the changes to Pension regulations and transferred out my first pension scheme, I find myself with a considerable pot of hobby money with which to indulge myself!  So my first thought was to expand my Bolt Action collection and create two 1500 point armoured forces to sit alongside my infantry based forces, I'm still tweaking the lists but roughly here's what I have in mind:

The two Tigers alone cost almost 1000 points with veteran crews, but I'm a big Tiger fan so had to base my Tank War list around them. IN the late war lists the Tigers are vulnerable to low fuel supply. Tiger number 2 is already on the painting bench awaiting undercoat, and I must say that this kit (another 'Wittman' resin and metal model), went together perfectly, without the slight gap between track guards and front hull. Anyway, this will be my Summer project and will keep me pretty busy, those damned Russians keep on tempting me too, I'm sure I'll have to do a late war 'Berlin' Russian infantry force somewhere down the line.

The Russians ARE coming!
Having drafted the above post a couple of days ago I simply could not resist when I saw these 40 Russian plastic warlord figures on eBay. I knew that at £2.00 per figure they still represented a bargain to me in terms of the sheer amount of time saved in assembling them, and the paint job is pretty OK. Plan is to give them a make over by repainting the faces and hands to match my style and then add highlights to the uniforms and finish the bases. I need only add a few more metal figures, an artillery piece, and a couple of T34's (0 to 2 the late war list allows!) and I'll have a complete 1500 point army ready to play. 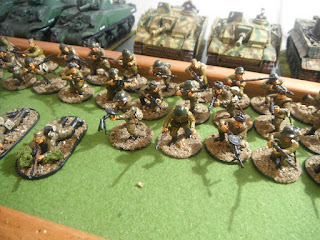 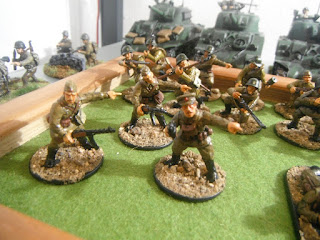 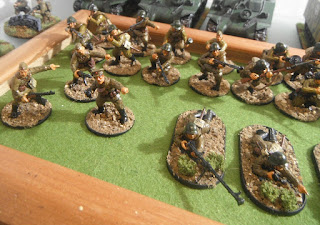 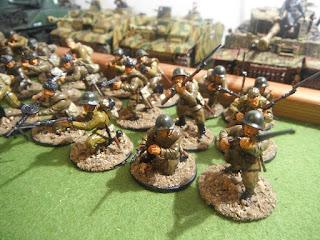 I'll avoid eBay for a while now as I'm pretty well chocked up with stuff to paint now including this fantastic 'Last Levy' box by Warlord, all metal figures representing Hitler Youth and Volksturm squads, prefect for facing up to my new Russians, the set contains some of the best character figures I have seen by Warlord with brilliantly crisp facial features including a commander with a fine porky face. 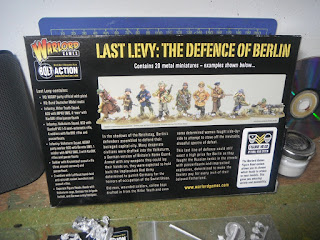 Obviously I'm committed to Bolt Action in a big way now, next stage may well be to invest in TSS boards to allow for a bigger playing area. Meantime battle continues on my table up in the room where I paint, on the subject of which I have also restocked many of my Vallejo paints and added new shades, as you can see I like to keep things tidy by keeping all paints neatly lined up!

Finally for now ..... BA 'Pin' markers.
Having quickly tired of seeing half a dozen or more helmets on rifles following a unit around the tabletop I decided I had to find a better way of representing pins. I did buy 20 of the dial type markers from Warbases, but even when landscaped they still looked too chunky for my taste so I went with a simple single pin marker on a 2p coin, and ordered a load of 7mm dice to stand on them to show the pins. Looks about right to me, I trialed both black and white dice (tiny things), before going with white as it helped make units with pins stand out more. 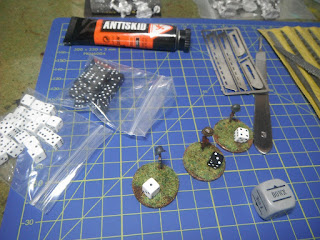 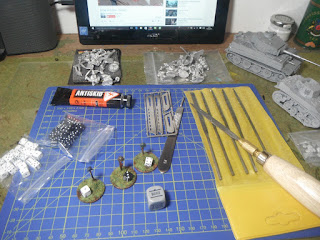 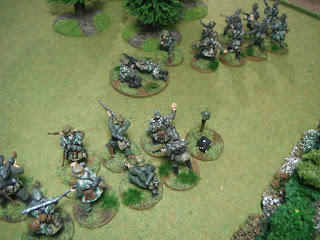 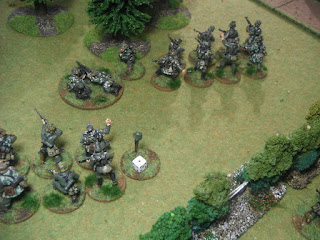