Tweaking Commands & Colors for the American War of Independence.

I'm feeling brighter this morning, family all due back this afternoon and I can't wait, I think it will be over the 'City' tonight for a couple of pints :-) Best pub in Dymchurch for me, but we are lucky enough to have a few within walking distance!   Dymchurch pubs.

I am now about ready to begin playing a few small games in order to test a couple of the 'tweaks' to the base Napoleonic rules. A series of recent posts on the 'Prometheus in Aspic' blog has discussed how the base game rules, excellent as they are in terms of being tried and trusted and producing well balanced, fast yet challenging games, could have a few small changes made to enhance and improve the command structure in particular. This includes being able to move and fight multiple 'units' together, where they share a common commander. Such is the design of C&C that a unit of say 4 blocks can represent a brigade, a division or whatever  according to the scenario. For my AWI version I want to represent individual companies of infantry (4 figures) and single artillery pieces on the table. IN reducing the scale (ground scale?), this would also mean that terrain should reflect this, so a wood should maybe be several hexes (as opposed to a single hex or two), as should villages and hills etc.

I need to make the final decision on what size of hex I intend to go with, bearing the above in mind. I have the choice basically of 95mm or 125mm, having stocks of these size hexes available. A standard size 9 x 13 hex grid using the 125mm hexes gives a table of just under the standard 6' x 4' size and looks about right with my 28mm figures, so far so good. However, when I lay out the figures/companies on this size hex something bothers me, the 'companies' look too far apart to represent conjoined units. I think the picture below illustrates this:

Here are 5 companies of continental infantry, commanded by a 'leader' base laid out on 125mm hexes: 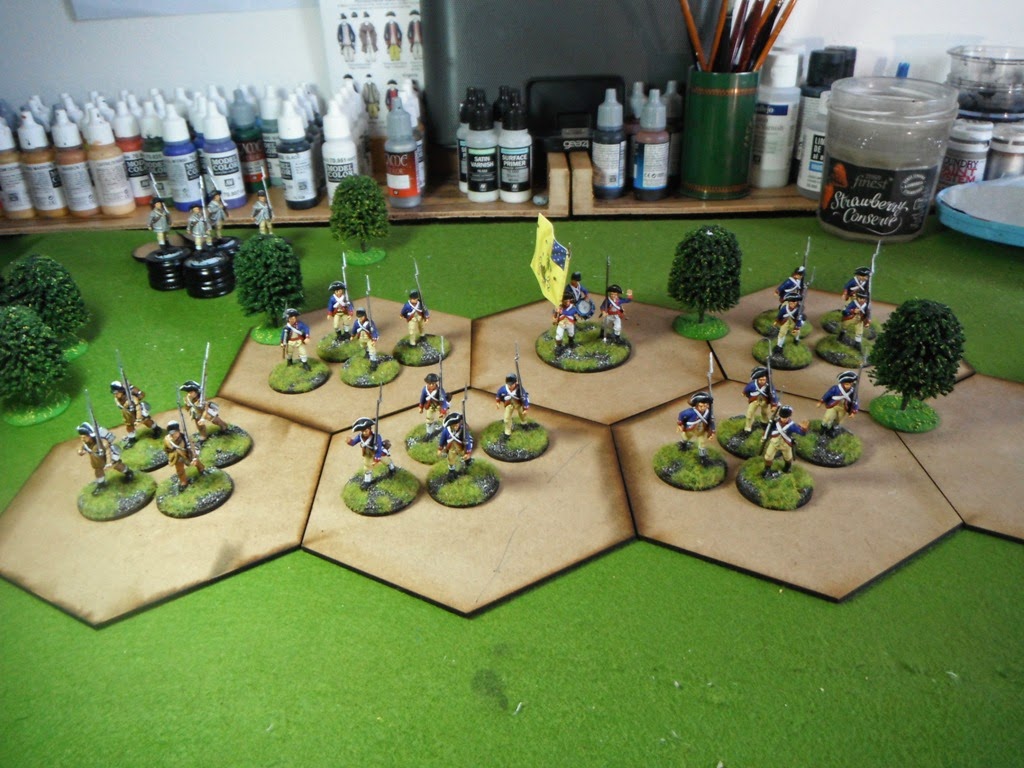 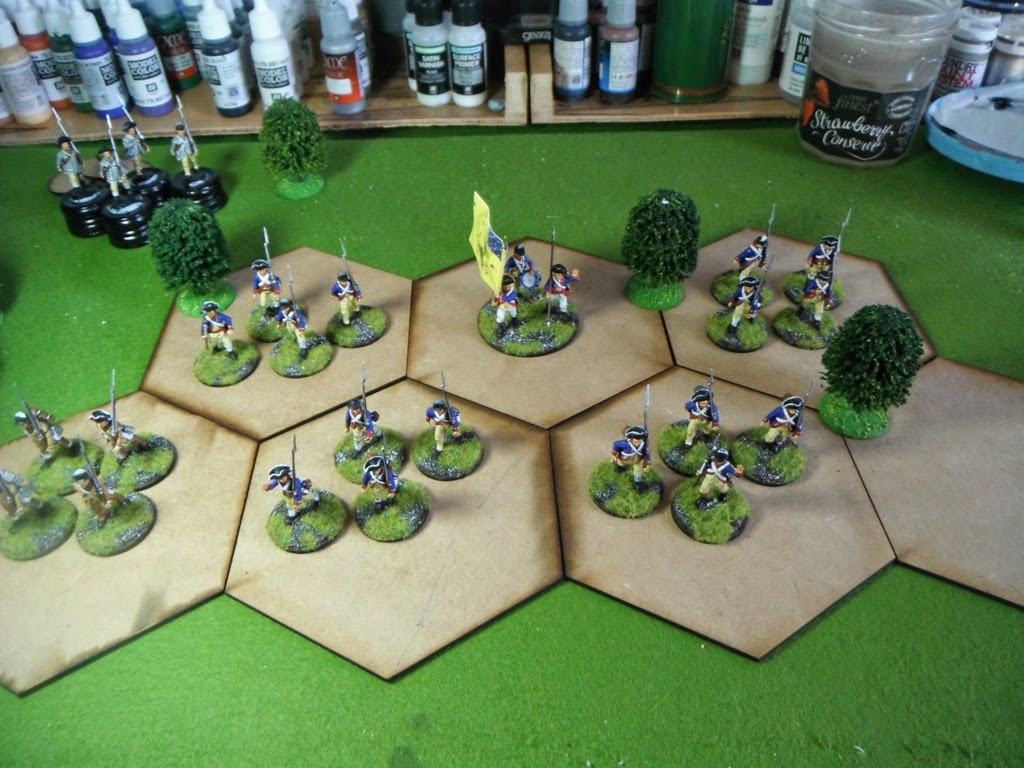 However, when I change down to the 95mm hexes things look much better to my eyes, the extended infantry lines look good, BUT - there is barely room on the hexes to place trees or houses or other terrain times on the hexes. 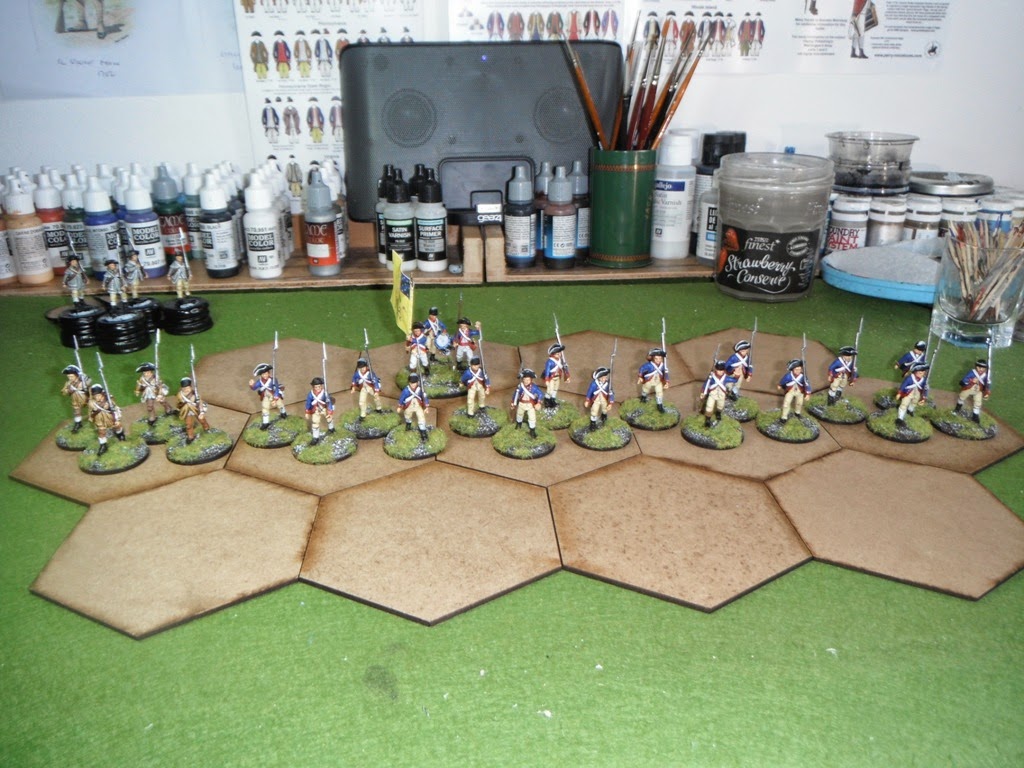 But if we bear in mind the fact that a village/small town or woods can be represented by 4 or 5 (or more) of the 95mm hexes it can be made to work.

Here we see the 5 companies with 3 in the woods and the leader base unattached behind ( but still commanding all 5 companies. 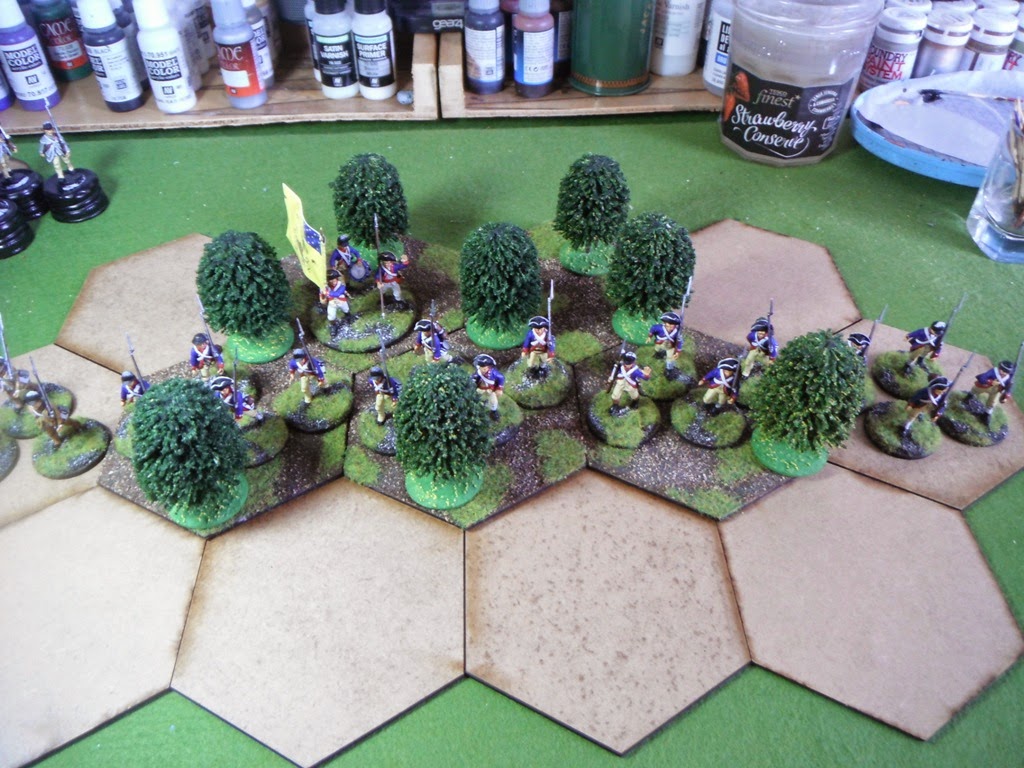 Now the 'commander has moved and attached to one of the companies in the woods, they all fit OK. 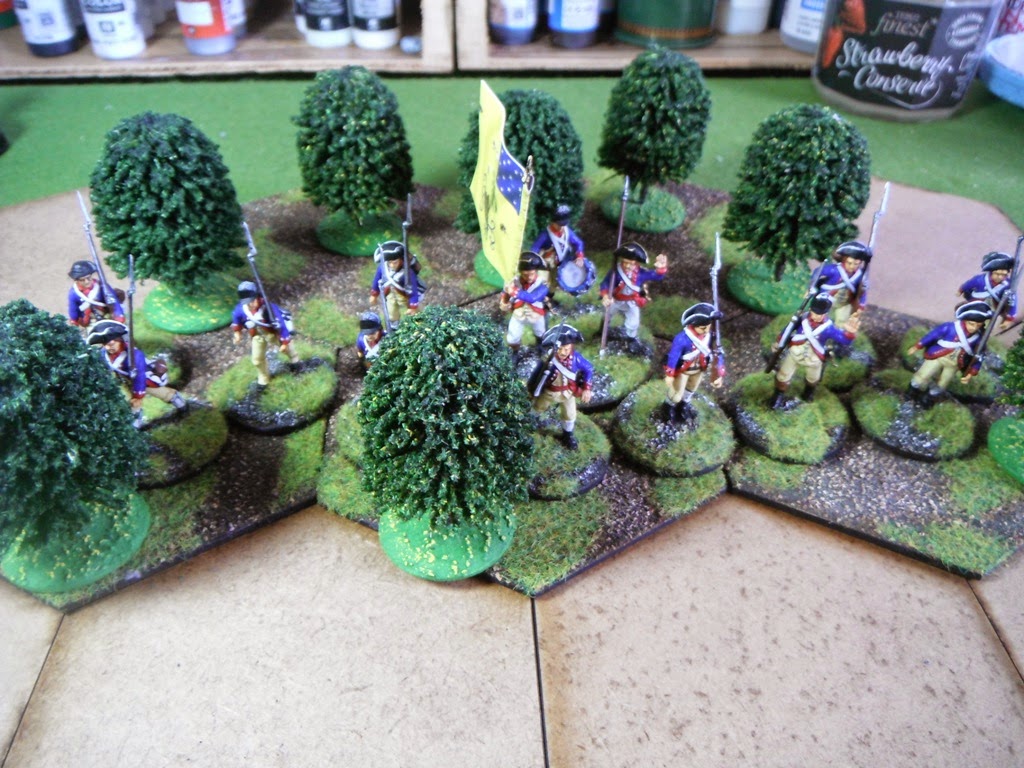 This is a 5 hex village/town. All five companies can occupy this area and combats will be fought hex by hex under normal C&CN rules. A temporary victory point could be awarded for the general controlling the majority of the village as in some Napoleonic scenarios. 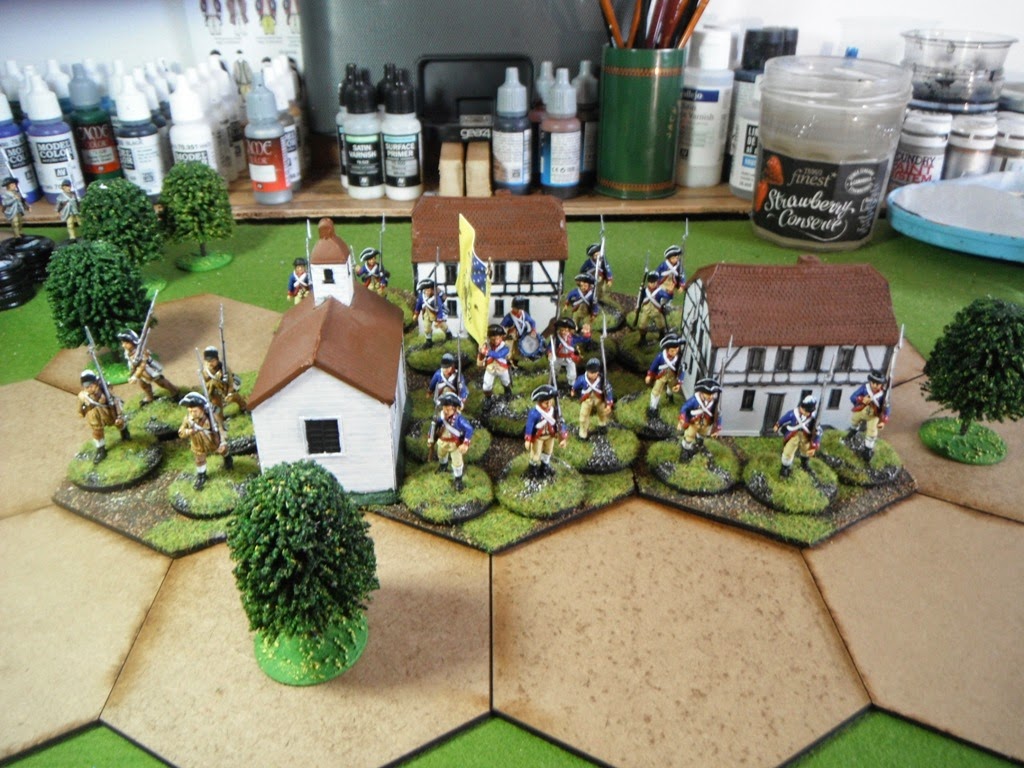 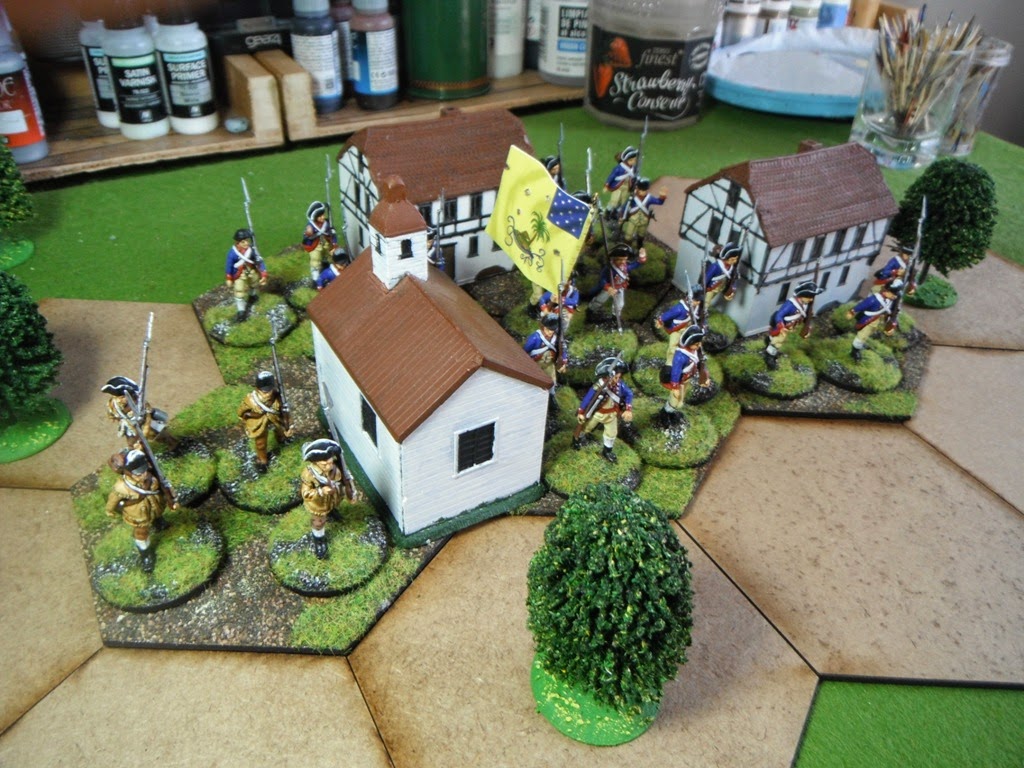 I really like the look of this! Given the fact that the board comprises 121 hexes I don't see any problems in using larger areas of perhaps 4 to 6 hexes representing major terrain features like hills, woods, BUA's etc. I need to test this by playing through an attack on such a feature, but don't see any problems?

Size matters?
One problem is that the table size looks quite small using the normal 13 x 9 grid with 28mm figures. Having been racking my brains over this for at least several weeks now I have come to a conclusion at last ..... I think ...... why not use the 95mm hexes on an extended grid on a 6 x 4 table? I have not quite worked it out yet but I think it should come down to something like 11 x 16 hexes as a playing area. I could of course outline the central 9 x 13 hexes so that I can play the 'unofficial' scenarios when I want to, or bigger games on the larger grid should I wish.

Having set it up to take the pictures I'm now convinced that I should stick with 95mm hexes when I mark up my boards 'Foy style'. What do you think?

For anybody who has not seen the C&C rules I have included links to official GMT games downloads. I have added the ancients versions as they contain several interesting ideas, one such being the 'line advance' cards (4 per pack) that allows a general to move and fight multiple units together and ties in with Tony's thoughts as posted on his 'Aspic' blog.

In spite of the hex grid I still think this gives the impression of a fairly traditional looking wargame. My plan is to have several such 'battalions' each commanded by a captain or such rank, and then to have a higher level commander (Major?) who may command say 2 or 3 such battalions in line with the ideas posted by Tony for a higher command structure for C&CN.