I'm pleased to say that the 6mm ebay auction went well and I achieved the price I had in mind plus a bit! I'm now engaged on making up small card boxes in order to protect all of the bayonets ready for posting. I decided that the best way was to pack each infantry base individually, a lot of effort but I'm determined that they arrive safely.

Having had a good think about what I want to do next I have decided to try my hand at building and rigging a couple of the lovely Napoleonic ship models from Rod Langton. This is something I have been interested in for many years and have previously built a couple of Navwar models. This time with my painting skills much improved I hope to try and match the finish shown on the Langton website. I've invested in the rigging guide (also written by Rod) and have ordered 2 ships to begin with, a British frigate and a 64 gun. I'm really looking forward to the challenge, especially working with the fine brass etched sail sets and ratlines etc. If it goes well I may build a collection of them and give naval wargaming a try.

Below is an example of Rod Langton's amazing work in 1:1200 scale, shes a Spanish 74 gun vessel, the sail setting is 'Easy Sail with courses furled'. The courses were often furled during battle to prevent them catching fire from the deck below and I think it's a good way to model the ships and this sets the standard I hope to achieve.


For the blog I will also continue to paint up Napoleonic units now and then to further develop the gallery.

Commission work.
Here is the completed 1st New York Continental's - 10mm scale of course - just waiting for varnish. The 3rd New York are next up. It now looks as though the British and Hessian armies will be coming my way later in the year so that's good news as I'm enjoying this period.

I could not resist painting the two 'Warrior' castings shown in the previous post, they have such charm and character. These are ECW figures painted up best as they can be to represent 'Sedgemoor' command figures. I have some 'Boyne' period cavalry to paint for John before getting stuck in to some Sedgemoor foot.

I also have 2 x 12 figure units of mounted 20mm dragoons plus 18 dragoons on foot scheduled - all ECW. This kind of rotational working keeps the painting fresh and the motivation high I find.

The ebay auction also bought in several requests for quotes for painting 6mm Napoleonics, but I'm pretty well booked for the next few months. 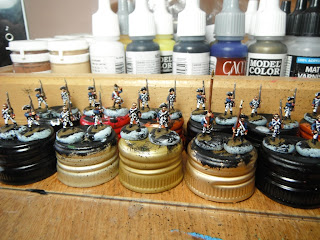 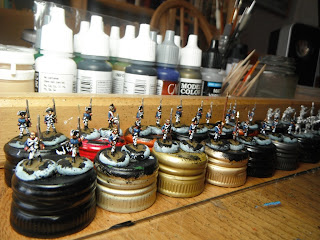 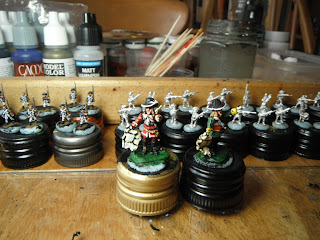