I had a few days rest from painting over the Bank Holiday weekend - recharged my batteries so to speak - and I'm now back in full productive mode once again! I managed to get started on my first Napoleonic ship model a Frigate and I'm really pleased with progress so far. Again I wanted to test myself to see just how much detail I could paint into such a tiny model. Pictures show just the hull painted up, but she is now under full sail awaiting the addition of ratlines and rigging, more pics once she is finished. Drilling out the tiny rigging holes was challenging but successful. A few pics below.

Commission work.
Added two more 24 figure units of the AWI, 10mm Pendraken of course. These are the 3rd and 4th New York regiments. I'm starting work on some 20mm ECW dragoons now, both foot and mounted.

New project!
I just can't seem to help myself ...... my enthusiasm for painting soldiers is currently higher than it's ever been and to this end my thoughts turned once again to the Waterloo project for 2015. Much as I'm enjoying painting the Langton vessels I still feel the need to paint some figures for myself. I know that I felt I had reached the point with 6mm where I had achieved everything I had set out to achieve in that scale and thoughts of painting something slightly arger had been going a round my head for some months and I had been browsing all of the 15mm manufacturers looking for inspiration. It eventually came in the form of 'Fat Wally's' wonderful collection of Essex Napoleonics, which has been saved in my favorites for a couple of years now. They are not so popular maybe now, but I love those old Essex figures and have decided to build a couple of armies again for Commands & Colors, but this time representing the 100 days campaign.

The challenge.
This is born partially out of nostalgia for those Saturday morning runs down to Canvey Island to buy my figures from the Essex shop/factory many years ago. We would pack the kids and the dog in the car and make a day of it. I would spend half hour in the shop buying my figures then we would visit the camping store and garden centre before a long walk with the dog in the country park down there, followed by a stop at McDonalds on the way home, certainly used to wear the kids out nicely!

Figures are already on order and my plan is to 'speed paint' these using a specific method I'll describe later. Maybe I'll tire of it a few months down the line, who knows, but I wanted to work in a scale that allows more detail and is less of a strain on the eyes ( I spend about 25 hours per week doing commission work now before I paint anything for myself). The 6mm Russian units certainly reached the peak standard I could achieve in the smaller scale and I needed a fresh challenge. Watch this space.

Heres a few pics for you in the meantime. 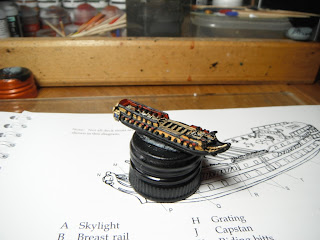 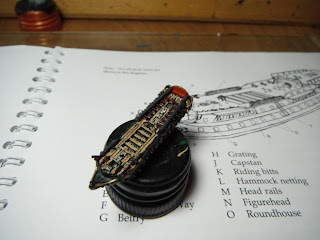 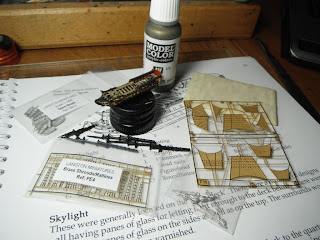 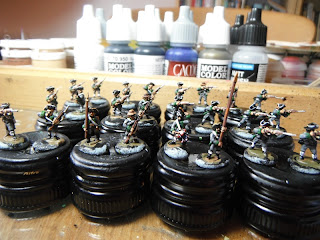 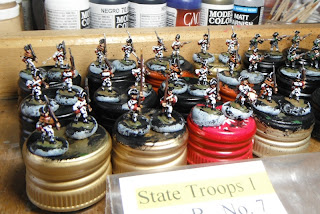 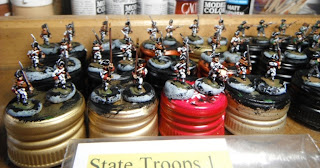 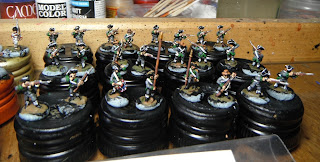 Edited to add latest Frigate pics..... damn fiddly stuff fitting those ratlines, she almost went flying across the room at one point! Perseverance paid off though .... not perfect but for a first attempt I'm happy and once rigging and flags are added she should look good I hope. I'm still working on the seabase which will be satin varnished once I'm happy. 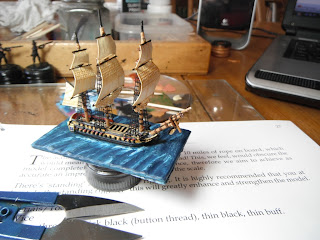 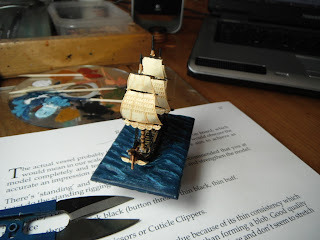 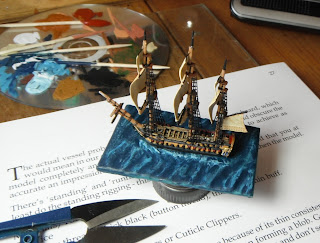