Going for it - a busy week!

Having cut down a few larger pieces of MDF to make up more of the doubled up units I'm now committed to working through the entire collection, adding additional figures as required. Once again something has just clicked and I know this is the look I have been after all along. In an odd way the black rear labels are a throwback to the 6mm version I did back in 2012 after I was first introduced to C&C Napoleonics. I now have all of the ready cut sabot bases thanks to Tony at ERM (link), who has been cutting my MDF probably since that time and always provides an excellent service. Along with the bases are some 5" hexes that will be used to mark out the board. The new 5" hex grid will be the key to this project allowing my 4"frontage bases to fit with sufficient space for buildings and other terrain items whilst keeping the integrity of the formations with just a 1" gap between the bases (please excuse me talking in 'old money!) What I will lose in portability should be more than compensated for by the overall aesthetic appeal of the game as a whole.

I should say that what I'm going for here is an initially Peninsular themed project, but with the freedom to paint other units as I see fit working towards an 1813 Prussian army and eventually the 100 days campaign.

Most recent additions are Young Guard, and the wonderful RHA Rocket Troop, recently released by AB. Blog followers will know my enthusiasm for this unit and I had been keenly casting around the various manufacturers trying to find suitable figures so  was delighted when they popped up on the AB new releases.

The YG base actually represents two different battalions, my main source of information is THIS excellent blog. The unofficial fanions (the YG were not issued Eagles) adds a nice splash of colour to the base. I have another base to do later. These were painted over just 2 days this week Tuesday and Wednesday.

On Thursday having completed the above I allowed myself to paint the newly arrived RHA Rocket base. Composition on the base had to be something of a compromise, after all who would let off rockets with horses in attendance! But I just had to use all from the set plus the mounted officer and on the whole, whilst a little crowded I'm pleased with it. These are small ground launch rockets, similar I would guess to those fired at Waterloo through a field of corn where they caused consternation among some Chassuers a Cheval. unlike my 40mm version these are correctly attired with the holsters rather than swords. Again these were painted in a single day when it wet and windy outside.

I also put together a base of 'Grenadiers' (C&C). These actually represent a 'Provisional' formation of elite shock troops and I learned that such units could comprise not just the Grenadiers drawn from the line but also the light company, so I decided to form this base from already painted Grenadiers and Voltiguers. I'm pleased with it save for the Eagle, but it's not too bad for the time being.

Next stage is to gradually put all of the other bases together, adding extra figures where required, starting with my Portuguese contingent for which I need to paint an extra gun and crew and 6 more cacadores, undercoated and ready to go. 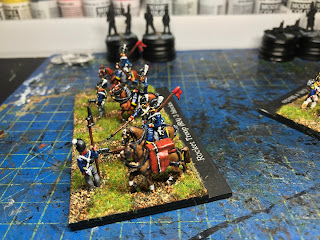 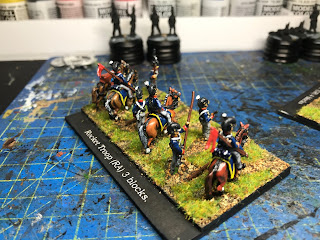 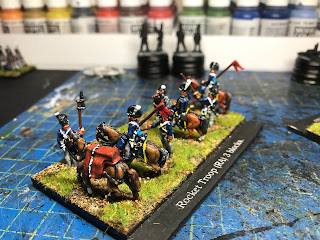 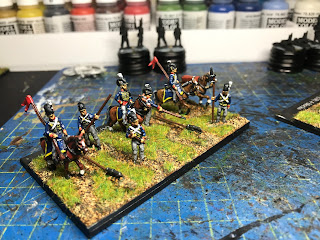 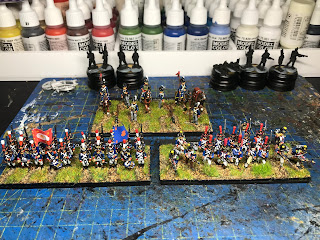 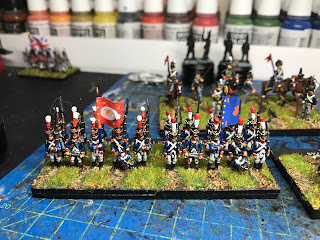 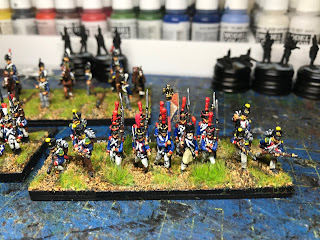 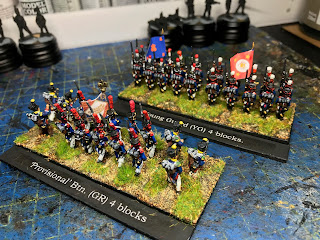 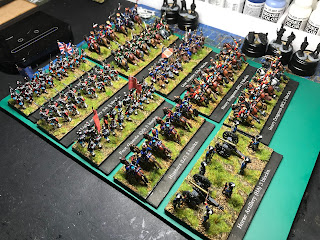 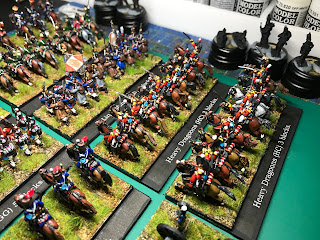 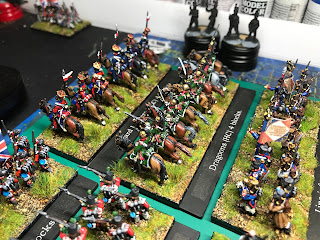 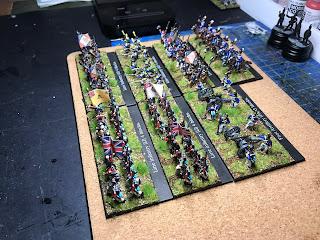 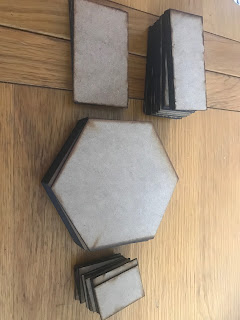 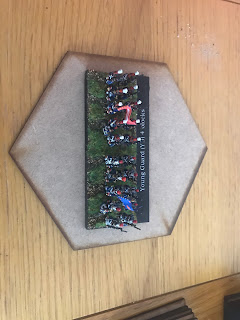