Still working on the new basing. I'm hoping to get two more AB artillery bases finished ( 2 guns/crews per base) and another 10 Swiss infantry done by the weekend. Everything has a 10mm printed label at rear on which can be placed my small casualty markers.

What you see here so far are most of the French and Anglo Portuguese units, 20 line infantry, 12 skirmishers, 6 light cavalry, 8 heavy cavalry, 2 guns. There are a few more bits on order from Eureka, another set of the Marines/ Royal Navy landing party, more Voltiguers skirmishing, carabiniers, to round up more units. I have about another 50 Spanish figures in the drawer for when I get round to the Spanish in due course, infantry, cavalry and artillery.

On the go are a French foot battery and a horse battery, hope to get the last 8 gunners painted today with the guns and basing tomorrow before I paint the 10 Swiss infantry. Once these are finished I plan a game, possibly early next week. Overall the idea is to keep focused on this project and painting for John C through the November lockdown and to have everything done by the time it ends.

Still to finish are the Old Guard Grenadiers/Chassuers base (10 of each, Grenadiers already done), the Guard heavy cavalry (GHC) base (4 Horse grenadiers painted & 4 Empress Dragoons to do). I also need to decide what to do my 10 marines of the Guard, what can I base them with? I looked for Engineers but AB don't yet do them, that would probably work best though. 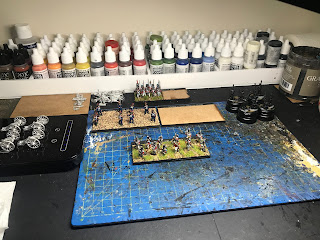 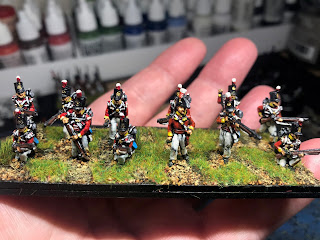 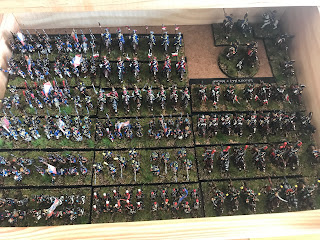 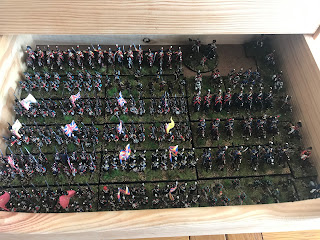 The artillery/baggage drawer so far. To the right are Spanish and some odd bases waiting to be rounded up. 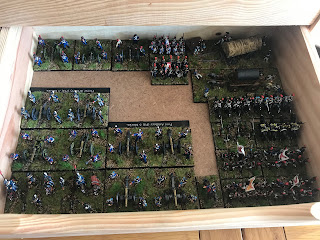 Below: Good stocks of AB's including a full Prussian 1813 army for the New Year. 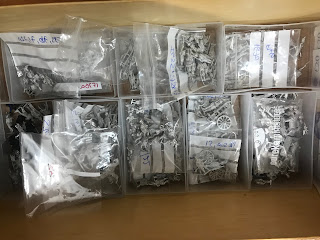 Below: The Blue Moon cavalry that I replaced with AB's but will still remain part of the collection once based. 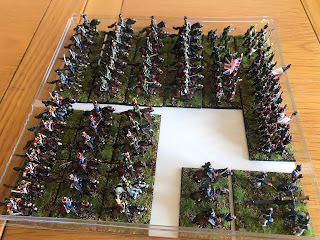