Back to Spain with C&CN! More terrain and Spanish army expansion.

Right, so my brief affair with The Portable Napoleonic Wargame is over and I have returned to my true love - Commands & Colors! I certainly do not mean to disrespect Bob Cordery's work and clearly they are the choice of many on the PNW Facebook group, but for me I simply can't get past C&C rules as my favourites for Napoleonic wargames. Since I was first introduced to them back in 2012 by Tony, (alias 'Foy'), I have found it impossible to settle for any other set of rules, I know that something just clicked at the time when I had been struggling for enthusiasm, and almost 9 years later I still get pleasure from playing them. Fighting in square against cavalry,  Combined Arms combat where you get to make a melee attack with supporting fire from artillery batteries, Retire & Reform, Leader casualty checks, the elegantly simple but effective flag symbol roll which handles morale so well forcing you to keep units well supported whilst leaving open paths of retreat and ensuring that weakened units forced to retreat can be replaced with fresh troops to avoid giving away Victory Points are all nuances of this wonderful game, easy to learn but takes years to perfect.

So, feeling upbeat once again I decided that I wanted to add some roads and rivers to my C&C set up. The game does not actually depict roads but many gamers do add them and house rules can give a move bonus to troops moving along them.

I used the 'Narrow' road sections from S&A Scenics to make the roads, giving them an edging of PVA/static grass and then carefully drybrushing them with vallejo Buff to add a little more highlight. I had to cut numerous small sections and angle pieces to work with the 3" hexes, but was well worth the effort I think. River sections were made from plastic, the type used on those cheap plastic folder covers, cheap and cheerful but I think again works well. Working out and cutting the curved sections took a bit of doing but after the first one was cut it was easy to make more from the template. Once again a grass edging was applied, I used straight Oxford Blue for the water followed by a heavy satin varnish coat.

I am considering printing improved tops for the hill sections as they are slightly too light, but on the whole I'm happy with the 13 hill sections that I now have. The new double tree bases each represent a wood hex, although two or three together representing a larger wood do look better. The Hovels buildings are just small enough to allow a base to fit a hex with two such buildings although sadly my church is too large to be used. The windmill still requires it's sails, which I will make from thin cloth to get that 'sagging' look, mostly it just sits off board for effect because I just love the model! Another job will be to carefully pin the mat to a board and then edge it, it will stop the creasing which I find irritating.

On the painting front I have decided to expand my AB Spanish troops to a full army so what with John's WSS troops I'll be painting a lot of white uniforms over the coming weeks. Latest off the bench is a second RHA battery and mounted officer, these will be joined by a recent release from AB the Rocket Troop set featuring mounted and dismounted figures with ground launch rockets, should be here next week along with a big pile of Spaniards, infantry, more cavalry and artillery.

Thus I end the week with a clear sense of direction and satisfaction at what I have achieved with this modest sized set up. Of course I had to place some figures on there so my Spanish troops got a photo shoot opportunity, I must admit they are among my favourites so far. 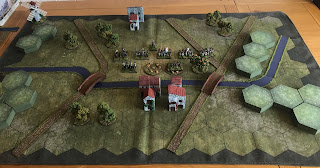 The entire thing will look much better once pinned to a suitable board and edged to avoid creasing. 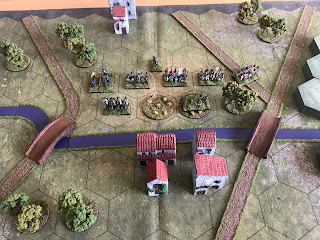 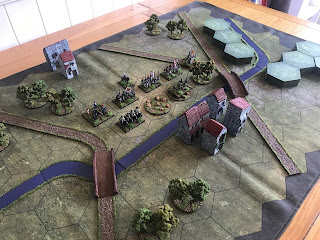 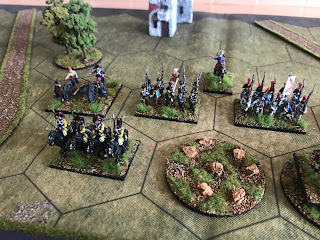 Of course I just had to feature my orange grove! 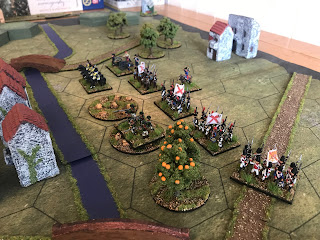 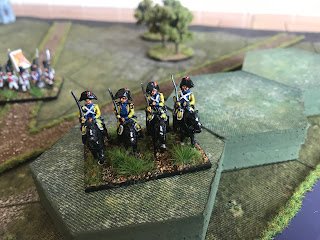 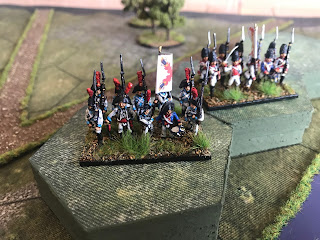 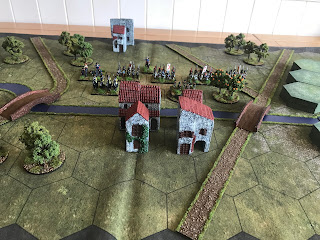 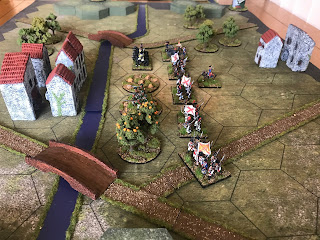 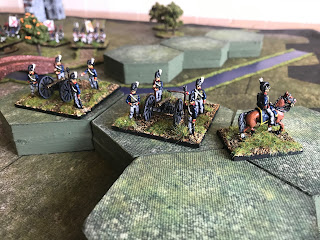 Some of the fiddly road sections required to fit the hexes. 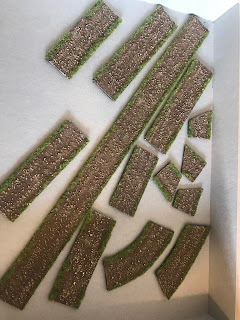 Edited to add that I found this updated version (V2) of the Spanish Expansion quick reference sheet available to download, it corrects an error on the Portuguese chart and includes the Rocket Troop stats. Looks like you need to roll double symbols to hit anything (with just two dice) which seems about right to me!