With the arrival of my new Commands & Colors printed mat and some quiet time on my hands this morning I decided to give the Ramekin order/activation system a shot. I placed some simple terrain on the mat (still waiting for hills), and a fair number of troops of various types. Whilst it it fresh in my mind I want to record some initial impressions of how the game plays with this system, which I present more as a series of notes than a full AAR.

Ramekin replaces the command cards with Order Chits and does away with the left/centre/right play of C&C which I frequently found frustrating and slow. Each army commander holds a stash of chits according to his leadership quality, for this trial I just went with both Good commanders and 5 chits each in the stash. The stash can be added to each turn by rolling for additional chits and again for my run through I simplified the activation roll with a standard D6 allowing 1 to 3 additional chits. This really opens up the game and speeds up play, there is an option to give a unit 2 orders and units need to be within 3 hexes of a Leader to be activated. Where an ordered unit is more than 3 hexes from a Leader it is Out of Command and the order can be challenged by the other side where a roll of 5 or 6 is required for the unit to act.

Ramekin introduces a new concept to C&C, that of bounds. Each bound now comprises a pair of turns, this is rather clever and adds a whole new dimension to C&C as it is possible for a player to make two consecutive turns. This is tied in with the activation roll for the bound, I won't go into further detail due to copyright but it is something I think will work very well,  especially against a live opponent.

This game flew along and I felt a real sense of freedom to move units right across the front. I retained the standard C&C firing rules at this stage, although Tony has tweaked the rules by reducing the effectiveness of standing fire combat which can be very deadly, an opposing unit can be wiped out by a single volley. I will introduce this idea next game as I did feel a couple of units were blown away too easily.

Squares were a bit tricky and I had to retire to read and think about it. In the absence of the brilliantly simple C&C square tracker which retains a command card from the players hand an order chit is required to form square which reduces the stash whilst the unit remains in square (?). Two regiments of French Dragoons charged two infantry units side by side, one was 'bounced' by a flag roll the other engaged the square but the combat was not resolved. I'm still giving this some thought in the meantime, being a bit rusty on the finer points of some C&C rules, especially around fighting in square and combat resolution.

Another note to self to check the rules around defending/attacking a town/village. Where artillery for example at just 3 hexes range are reduced to zero dice due to the -2 for firing/fighting into a BUA this seems very harsh and I wasted a couple of orders before I worked this out! I must be doing something wrong here? The defending French infantry were finally forced out by a retreat flag, I'm sure this is not correct but I can't see anything about being able to ignore a flag if defending such? Again I am just making notes here and will correct them once I have figured out the answers.

I need to acquire some order chits next, as you can see I used the larger white dice for the game, the micro dice being used to show current unit strength after losses, they work quite well for me. There were a lot of dice about!

The game is still set up and in play and no doubt I will begin to get more to grips with some of the above as things move along.

Overall, so far I'm really pleased with the flow of the game over the card driven system, there is an option of using the tactician cards from expansion 5 which could introduce some more random events, additional combat dice etc but for the time being I'm keeping it simple. Any comments or suggestion/corrections to the above are welcome and part 2 will hopefully see more clarification. 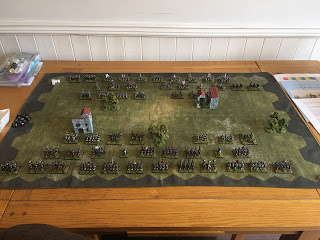 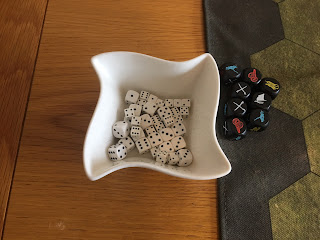 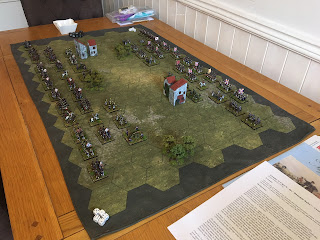 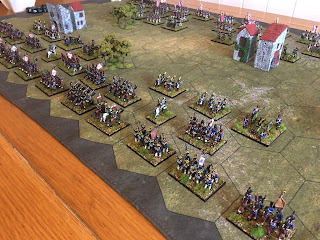 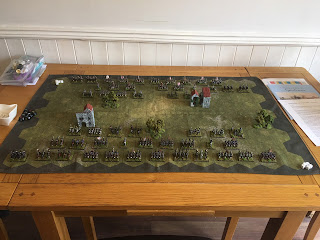 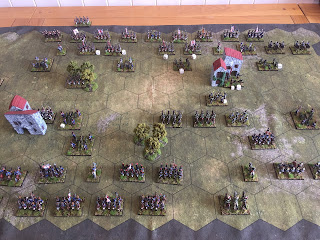 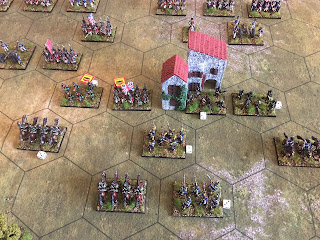